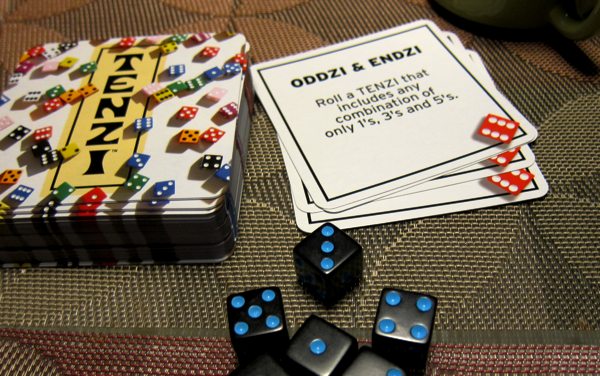 I'm excited to be going on Jonathan Coulton's JoCo Cruise this year. We've been asked to bring some games with us, so I'm bringing the Tenzi dice game plus the variation deck.

The basic rules are simple - everyone starts out with 10 dice and the goal is to roll your dice as fast as you can until all of them show the same number. Every time you roll, you are allowed to set aside any dice that match your desired number. When all ten of the dice show the same number, you shout "Tenzi!," throw your hands in the air, and gloat while the other players gnash their teeth. The game rules included a couple of variations on the basic rule set, which we also played and liked.

There's also a deck of cards called 77 Ways to Play Tenzi, which takes Tenzi to a new level. The deck adds variety, surprise, and humor to Tenzi. It makes Tenzi so much more fun that I think the company shouldn't sell the dice without the cards.

Each Tenzi card has a variation of the basic rules. The rules for the variants are simple enough that they can be described in one or two sentences. Here are a few examples:

To win the above game, you start with nine dice and roll until you get nine threes. Then you have to arrange the dice as shown on the card, and then roll the tenth dice until you get a six.