What happens when you tack $80 in cash on corkboards 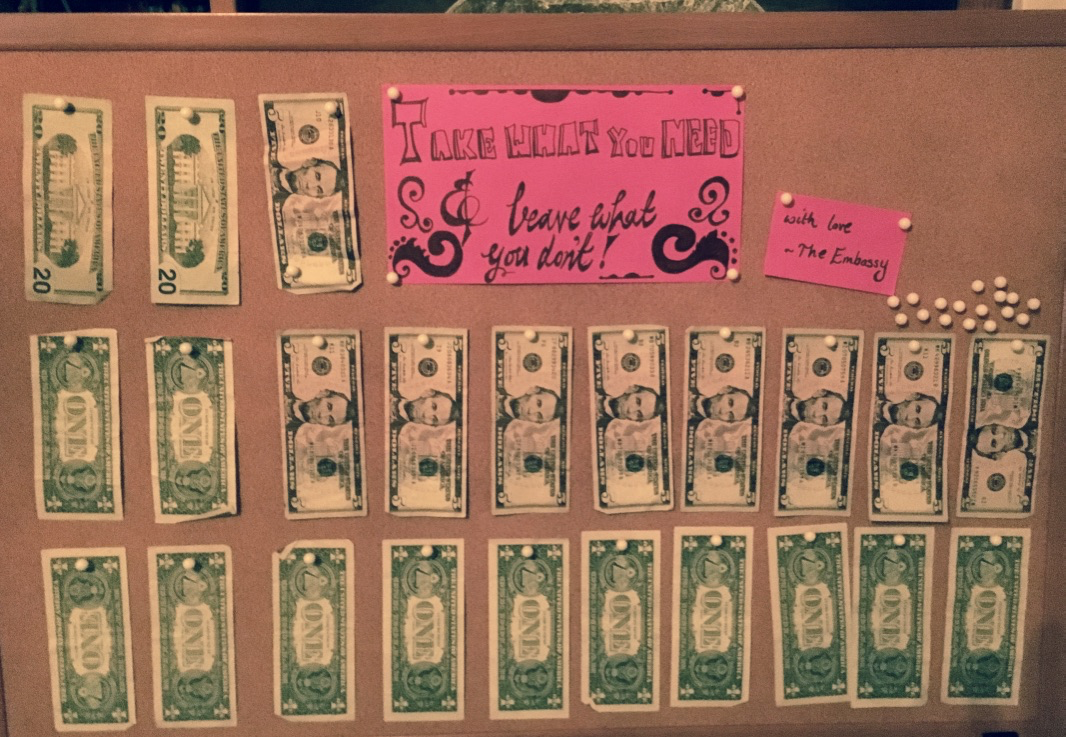 Zarinah Agnew lives at the Red Victorian, a modern-day commune in San Francisco's Haight neighborhood. Six months ago, as an experiment, she and her roommates thumbtacked $80 in cash on three different corkboards (at the Red Vic and another local intentional community called The Embassy). They then attached small pink signs that read, “Take what you need, leave what you don’t!”

They called each of their experimental corkboards, the "Great Wall of Money."

Here's what happened next, according to Agnew:

We left them up in our houses and watched. It was kind of amazing.

I watched them stay pristine for a few days, and slowly gain extra funds. Once they had been touched, the notes started to move and disappear. The $1s went first, but again once a $20 had gone, the others followed suit. But they oscillated back and forth in a healthy manner.

Then one night the board was cleared, presumably by a single person. It was full at 3am and gone by 6am that morning. I was sort of delighted by this as it demonstrated to me that the board wasn’t remaining replenished through politeness. People were using it as it was intended. And lo, after a week, the empty board, started to collect notes once more...

Before long the Red Vic Great Wall of Money collected bart tickets, maps, notes, and all sorts of things. Eventually, the community moved it out onto the street where it collected even more goods and services — half smoked blunts and items of clothing were pinned to the board.

Read the entire story here: Experiments into other ways: The great wall of money

Dan Denegre (Space Race Studio) used his DJI Mavic 2 Pro drone to shoot this eerie yet beautiful video of San Francisco on pause. The soundtrack is “La Guitarra Triste” by Cast of Characters. “Thankfully few people are outside (I wasn’t even close to a person), but seeing the shops boarded up is tough to […]