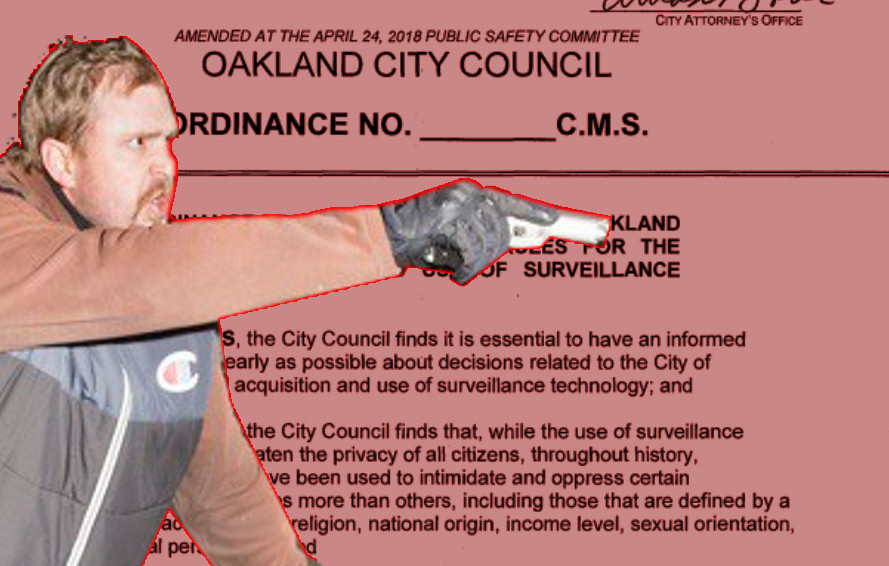 Oakland, California -- a city across the bay from San Francisco whose large African-American population has struggled with gentrification and police violence for decades -- has a long reputation for police corruption and surveillance.

Many people outside of California first became aware of the Oakland Police Department's terrible internal controls during the Occupy movement, when swivel-eyed, pistol waving undercovers vied with the attempted murder of a decorated veteran and vicious, unprovoked shooting of photographers for headlines. After Occupy, there was the official stonewalling and the revelation that the top cop had a policy of ignoring any complaints, queries or messages about Occupy.

In the years since Occupy, there have been unprovoked police killings and cops who raped teens with impunity.

Oakland isn't just a locus of police violence, though: it's also ground zero for some of the most extensive, least transparent urban mass surveillance outside of China, with "fusion centers" and license trackers being deployed without citizen oversight or consent, often in total secrecy.

But Oakland isn't a city that takes this kind of thing lying down. The city, after all, is the birthplace of the Black Panthers, and its tradition of organized resistance has only strengthened in the years since.

Thus it is that the Oakland City Council unanimously passed the city's "Rules for Surveillance", the country's most stringent police surveillance oversight law.

The law provides for a "Privacy Advisory Commission" and directs police to produce an annual report with fine-grained details of how surveillance technology was used. The Privacy Advisory Commission must be notified any time the city and its police seek funding or appropriations to procure any new surveillance technology. The city is also barred from entering into nondisclosure agreements with surveillance technology providers that would impair this transparency -- a key provision, doubtless inspired by the Harris Corporation's practice of binding police departments to secrecy over its Stingray cellphone spying devices, a bizarre attempt to thwart transparency that culminated with Federal agents raiding local police departments to seize evidence before it could be introduced in open court, which would have revealed the existence and characteristics of Stingray devices.

In the wake of Oakland’s 2013 efforts to approve federal grant money to construct a "Domain Awareness Center," the city has now also created a "Privacy Advisory Commission," or PAC.

This body, comprised of volunteer commissioners from each city council district, acts as a privacy check on the city when any municipal entity (typically the police department) wants to acquire a technology that may impinge on individual privacy.

The new law requires that the PAC be notified if the city is spending money or seeking outside grant money to be spent on any hardware or software that could potentially impact privacy.