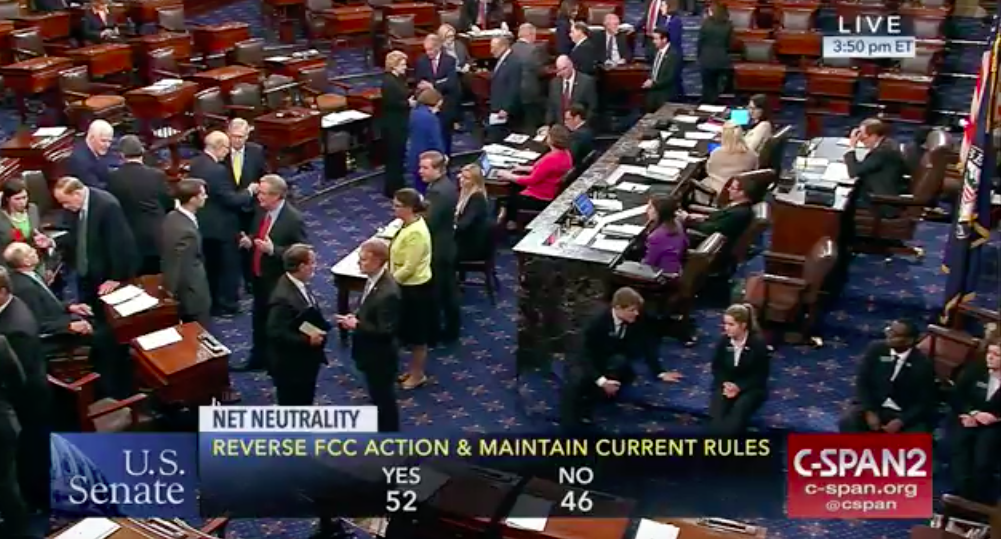 The US Senate has just voted in favor of REVERSING the #NetNeutrality rollback which Trump FCC chairman, Ajit Pai put in place. This is a major win for the internet, Net Neutrality, and the American people.

BREAKING: We just won the vote in the Senate on #NetNeutrality. Thanks to everyone for pushing so hard. We have more work to do but this is an excellent beginning.

#NetNeutrality 52 votes in the Senate to restore Net Neutrality! Time to declare victory ! Onward to the house

The House still has to vote, and it's a long shot. Trump can veto. But our courts could overrule that.

You can re-watch the vote here [CSPAN].

Senate and House Democratic response, below.

Single most valuable thing from today's #NetNeutrality vote is seeing who's bought and paid for.

Thune on the politics of the net neutrality CRA vote: "We are having a fake argument," John Thune, the Republican of South Dakota, said about the vote. He said the Senate "is going no where, my colleagues on the other side know that."

As of today, we'll have an official record of which lawmakers are on the side of big corporate ISPs when it comes to our digital civil rights.

A huge moment for the future of the internet. #REDALERT pic.twitter.com/yJkdAUN66t

another Republican in addition to Collins of Maine https://t.co/LNgDcy6Ov7

The Senate vote is rolling in as we speak (watch: https://t.co/yhadmYog6i).

This is going to be an excruciatingly close vote... Don't stop reminding your lawmakers that #NetNeutrality is NOT a partisan issue. 86% of Americans oppose the FCC repeal! https://t.co/VkoZiZdHEd pic.twitter.com/A2Cbr90yhP

Democrats spent a great deal of effort securing Kennedy's vote. A Democratic aide tells me that Markey and Kennedy have met and spoken on numerous occasions and their staffs have been in "constant communication." #netneutrality