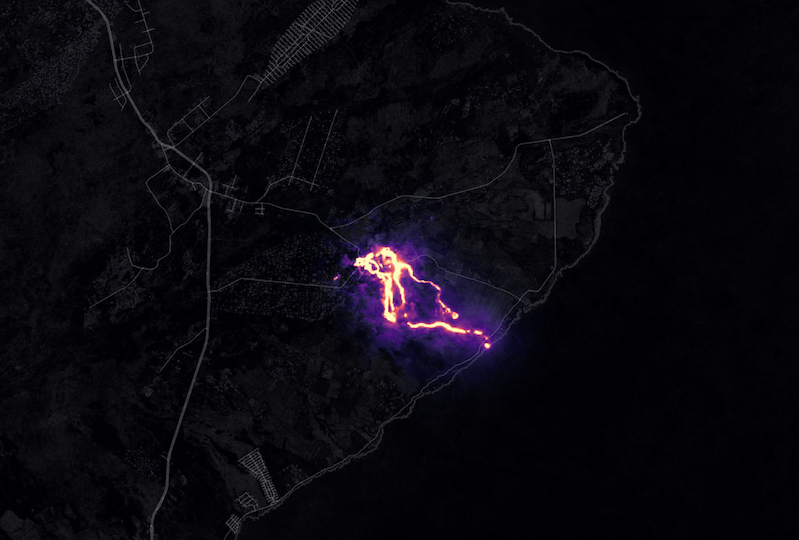 The small but bright fissure at the left edge of Kilauea's lava field can already be seen from space via infrared imaging, but it's dwarfed by the magnitude of previously existing flows.

Though Kilauea has been erupting continuously from the Pu’u O’o vent since 1983, the eruption took a dangerous turn on May 3, 2018, when new fissures opened in the residential neighborhood of Leilani Estates. Three weeks later, some fissures have become less active but several others have emerged along the Lower East Rift Zone, including a few just northeast of Leilani Estates.

As of May 25, 2018, geologists with the U.S. Geological Survey were tracking 23 fissures. One of the most active is fissure 22, which has shed enough lava to create a channel that extends all the way to Hawaii’s southeastern coast. That lava is entering the ocean near MacKenzie State Park. Though it is routine for lava from Kilauea to reach the ocean, this is a new entry point.

The Operational Land Imager (OLI) on Landsat 8 acquired the data for this false-color view of the lava flow as it appeared on the night of May 23, 2018. The image is based on OLI’s observations of shortwave infrared and green light (bands 6-5-3). It was cloudy when the data was acquired, but a small break in the clouds made it possible to image the lava flows. The purple areas surrounding the flows are clouds lit from below. The animation also makes use of a daytime-image from OLI, with information about the location of roads and coastlines.

There's a labeled high-resolution version available on the site for those interested in a closer inspection.