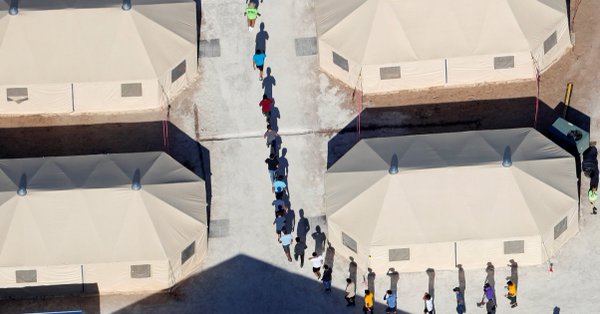 An internal document shows the U.S. Navy has developed a plan to construct 'austere' tent cities capable of holding tens of thousands of immigration detainees on remote bases in California, Alabama and Arizona.

The Navy planning doc obtained by TIME says two sites in California could house up to 47,000 immigrants each, two sites in Alabama could host 25,000.

“It would be inappropriate to discuss internal deliberative planning documents,” he told TIME.

The U.S. Navy is preparing plans to construct sprawling detention centers for tens of thousands of immigrants on remote bases in California, Alabama and Arizona, escalating the military’s task in implementing President Donald Trump’s “zero tolerance” policy for people caught crossing the Southern border, according to a copy of a draft memo obtained by TIME.

The internal document, drafted for the Navy Secretary’s approval, signals how the military is anticipating its role in Trump’s immigration crackdown. The planning document indicates a potential growing military responsibility in an administration caught flat-footed in having to house waves of migrants awaiting civilian criminal proceedings.

The memo also proposes a camp for as many as 47,000 people at former Naval Weapons Station Concord, near San Francisco; and another facility that could house as many as 47,000 people at Camp Pendleton, the Marines’ largest training facility located along the Southern California coast. The planning memo proposes further study of housing an undetermined number of migrants at the Marine Corps Air Station near Yuma, Arizona.

The planning document estimates that the Navy would spend about $233 million to construct and operate a facility for 25,000 people for a six-month time period. The proposal suggests these tent cities be built to last between six months and one year.