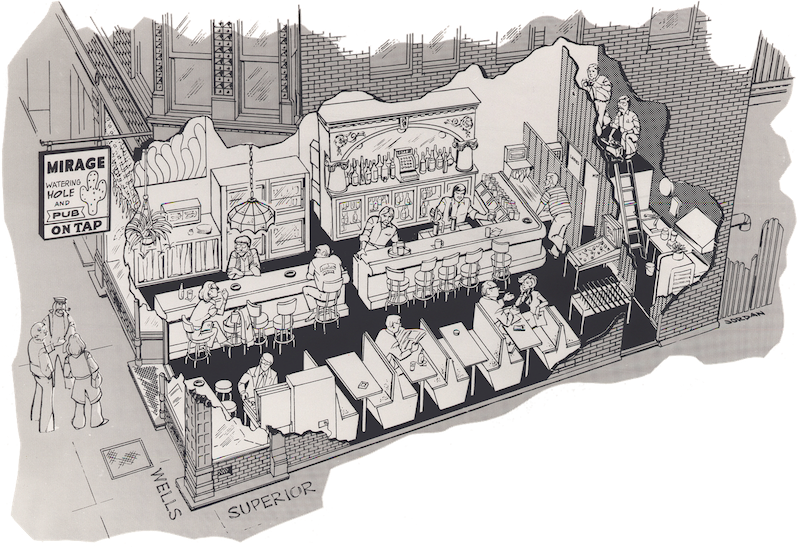 Forty years ago, investigative journalists in Chicago hatched an audacious plan to create a fake tavern packed with hidden microphones, cameras, and reporters everywhere working as bar staff and customers. Their goal was to document local corruption. Topic has a great oral history of the project.

The ensuing 25-part expose ended up causing a huge rift in journalism over the ethical implications:

The 25-part series had immediate and lasting impact. Over a dozen officials were suspended or fired. By June 1979, 18 city electrical inspectors had been convicted of bribery. Mayor Michael A. Bilandic created an Office of Professional Review to ferret out corrupt city employees, and the Illinois Department of Revenue created a task force to uncover tax fraud dubbed the “Mirage Unit.” The series, which had exposed citywide corruption with cinematic flair, was an obvious candidate for a Pulitzer, and was subsequently nominated by the Pulitzer jury in the category of Local Investigative Reporting. But when the nomination reached the board, things derailed quickly. Eugene C. Patterson, board member and editor and president of the St. Petersburg Times, declared that the nomination sparked “the most fascinating debate ever heard at Pulitzer.” The Mirage story, he said, “had an element of entrapment.” Benjamin C. Bradlee, executive editor of The Washington Post and also a board member, stated that, “We instruct our reporters not to misrepresent themselves, period. We felt a Sun-Times award for this entry could send journalism on a wrong course.” The Pulitzer was awarded to Pennsylvania’s Pottsville Republicanfor a series on coal and organized crime.

• The Story Behind the Chicago Newspaper That Bought a Bar (Topic)