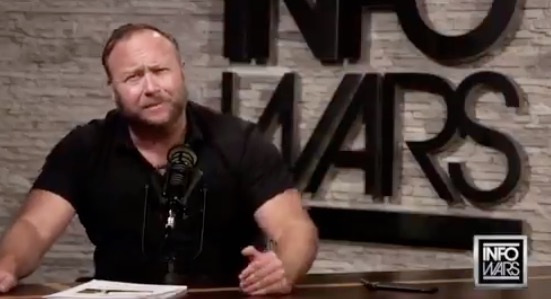 In January 2015 Alex Jones said on a video that "Sandy Hook is a synthetic completely fake with actors, in my view, manufactured. I couldn’t believe it at first. I knew they had actors there, clearly, but I thought they killed some real kids. And it just shows how bold they are, that they clearly used actors. I mean they even ended up using photos of kids killed in mass shootings here in a fake mass shooting in Turkey -- so yeah, or Pakistan. The sky is now the limit."

In December 2014, Jones claimed that the mass shooting was "a giant hoax."

Today, Alex Jones posted a threat to the parents of Sandy Hook who dare to repeat what Jones has said: "At a certain point," he says, "do cease and desist letters have to go out? With a letter and videos and everything so it's all on record? ... You see, *I'm* the one whose under assault, *I'm* the one whose being misrepresented."

In a video posted on Twitter, Alex Jones threatens Sandy Hook parents with cease and desist letters if they keep talking about his conspiracy theories https://t.co/NWakPz7xMg pic.twitter.com/WlEKBV7wQh

UPDATE 4/12/2018: Yes, Fox did accidentally put up the wrong poll graphic, but Fox has since pointed out that the confusing graphic wasn’t actually showing that Fox is the least trusted network. Instead, what the graphic intended to do was to compare CNN, MSNBC and Fox News to Trump. The graphic asks who people trust […]

After losing the Alabama special senate election two days ago, Roy Moore remains stuck in the Denial stage of the Kubler-Ross Model of Grief. In a cartoonishly self-important video statement released this morning, Moore’s eyes unwaveringly tracked a teleprompter while he recited, “We are indeed in a struggle to preserve our republic, our civilization, and […]