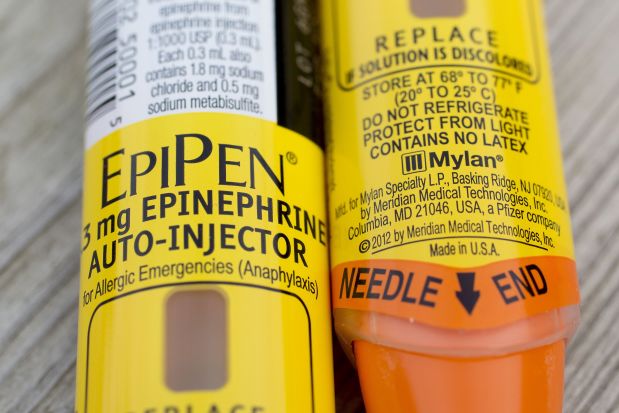 The EpiPen is a widely used medical device that delivers emergency medication to prevent someone with a severe allergic reaction from going into anaphylactic shock. There's a shortage of EpiPens across the United States. Parents of kids with serious allergies are worried about sending their kids back to school without one.

They're also angry at EpiPen maker Mylan's pricing tactics. Mylan raised the price by 500% over a decade to more than $600 per 2-pack.

The scarce availability, caused by manufacturing issues and local supply disruptions, has been an issue for months. Sales of the pens typically spike during the back-to-school season, as parents buy two-packs to leave at school and refill expiring prescriptions to keep in children’s backpacks or at home. Now many parents are heading to pharmacies for fresh medications to find that they are in short supply.

The shortage — which can vary among pharmacies and is being described as “occasional spot outages” by federal regulators — presents bad options for families: Go pharmacy to pharmacy hoping to get lucky, or rely on an expired dose to save their child.

Schools often require parents to supply the medication before classes begin and typically won’t accept expired versions. Many have stashes of their own, but a program that provides free Mylan-brand EpiPens to schools is facing a backlog. Schools requesting the devices must now wait at least two months before their shipments arrive, a representative for the program said – about double the normal time frame.

It’s not clear how many children could be affected. Nearly 6 million — roughly two in every classroom — in the United States have food allergies of some sort, according to the advocacy group Food Allergy Research & Education. But not all carry the devices or are trying to fill new prescriptions. Three companies currently make the epinephrine devices, but Mylan dominates the market, selling EpiPen and an authorized generic.