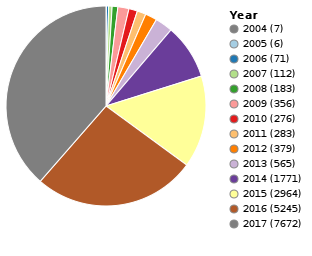 That pie chart shows the number of games released on Steam. The number of new titles being published there is overwhelming, almost doubling in 2015 alone and increasing anually by between a quarter and a third since. The sheer volume of absolute garbage is making it impossible to find good stuff, and indie developers, unable to market their way out of the sewer, can't make a living. Welcome to life in the Indie Post-Apocalypse.

Do you have the answer yet? In reviews? Sales? Dollars? Actually it doesn’t matter what units you chose. Because to a first approximation they’re all the same.

• Zero reviews
• Zero comments on announcements of the game launching
• One curator, who has depressingly enough not even played the game
• Two comments in the entire forum section

Things have been asymptotically approaching zero. Now we’ve arrived. We’ve arrived at the worst it can get because you can’t sell less than zero. An experienced game designer with multiple shipped titles and a moderately sized following shouting into the void and getting no response whatsoever.

Steam's dominating position in digital game distribution means that market saturation is converted into some weird form of attention-economy inflation. The currency -- the games -- can be devalued at will. Privately-owned, Valve/Steam could eat a recession or even a collapse of its own internal market and not skip a beat. Products representing years of labor (or, more likely, mere hours of it) all take on the same ephemeral, vaporous quality, disappearing into the void as easily as tweets.