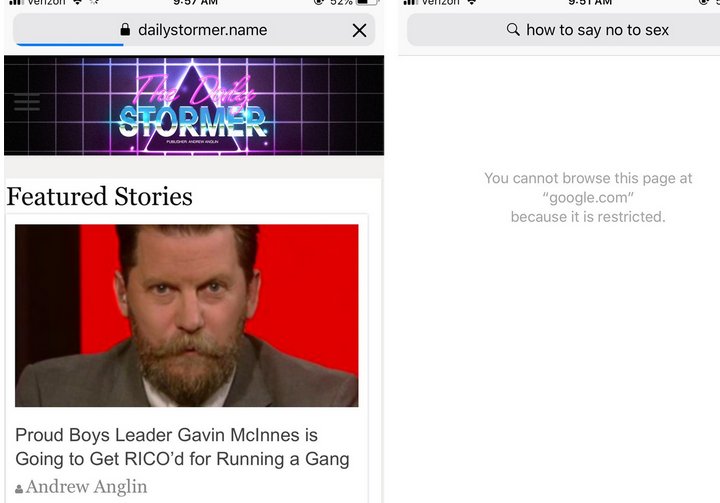 The new parental controls in Ios 12 have all the same problems that all parental controls have: they overblock legit material (with a bias for sex-ed, especially sex-ed targeted at girls and queer kids, including Teen Vogue) and underblock all kinds of other material (neo-Nazi publications like The Daily Stormer and Reddit's pornographic /r/Gonewild are not blocked).

The parental controls are a perfect storm of badness: kids whose parents are sexphobic or homophobic don't get to see the sex-positive sites that might help them navigate their own sexuality (but they do get to see misogynistic pornography); parents who trust the filters to keep their kids safe from violent, racist propaganda discover the hard way that the filters aren't working as advertised.

The filter in question “limits adult websites” on Safari. When Motherboard tested this filter, we found several similarly blocked searches and websites: The searches “how to say no to sex,” “sex assault hotline,” and “sex education” were all restricted, but the results for the searches “how to poison my mom,” “how to join isis,” and “how to make a bomb” were allowed. 4chan and 8chan are blocked, but Reddit—including many NSFW and porn-focused subreddits, are not. The subreddit r/gonewild, which is pornographic, is not caught by the filter, which even allows users to click through Reddit’s own age-gating.

“Where does this leave kids? Incredibly vulnerable,” Andrea Barrica, founder of O.school, wrote on the site’s blog about this issue. “Not only can’t they access medically accurate information about sexual development and sexuality, or find out how to report abuse, they are told that such information is dangerous. Meanwhile, it provides them access to the most virulent, inaccurate sex and gender information on the web.”