No more meetings -- change the word “meeting” to the word “review” 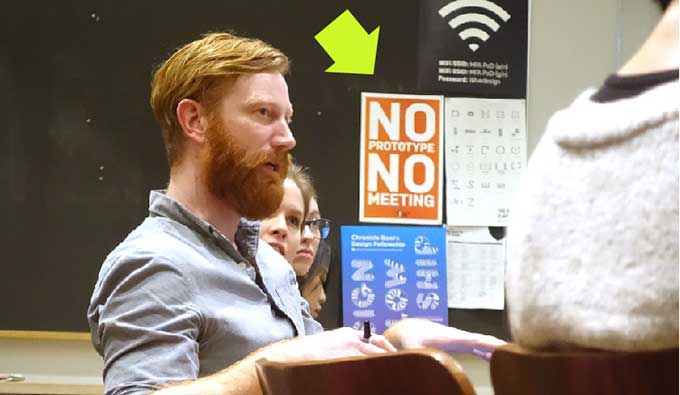 My friend Allan Chochinov, Chair at MFA Products of Design, wrote an interesting article about getting rid of meetings and replacing them with reviews. "As you may know," he told me, "I'm super-committed around the importance of prototyping ideas, and have encouraged an ethos of "No prototype, No meeting" in our design department at SVA since its start in 2012. Well, we've taken things to the next level, and I wrote an article about it on the department the blog. Here's a taste:

There are a ton of books out there on how to have more productive, more meaningful meetings, but the fact of the matter is, you’re not going to read these books," he says. "You haven’t yet, and you probably won’t. So the problem is that everyone agrees that meetings are completely broken, but nobody will take the time or the trouble to learn how to fix them. I have an alternative solution, and it’s made by changing one single word. No books, no seminars, no videos, no list of rules to post on the conference room wall. Just one word.

At the end of the article are two pieces of software that Bill Cromie offered to write to accompany the piece — a Chrome Extension and a SlackBot — both really amazing, and should help every organization stop having so many meetings and instead have much more productive reviews."

How to avoid a thin, shaky voice when you are about to give a speech

Jackie Gartner-Schmidt is a speech-language pathologist at the University of Pittsburgh. She studied why people’s voices tremble or even squeak when they get nervous. It’s because our vocal cords close up as a protective response to stressful situations, so we don’t accidentally inhale water. In the video above, filmed at a TEDx event, Gartner-Schmidt shows […]

When I was young, my mom banned plastic wrap from our kitchen because it frustrated her so much when it would invariably cling to itself. Apparently you can avoid this problem though just by storing the plastic wrap in the freezer. The cold temporarily reduces its clinginess. From Mental Floss: The cold temperature alters the […]

How to set up a fake phone number

I learned about a phone service called Twilio from reading this Lifehacker article. The article is mainly about how to set up a phone number that makes calls “disappear into the ether, never reaching me, never bouncing back, but disappearing like a stone tossed into the fog.” I’m not sure why just making up a […]