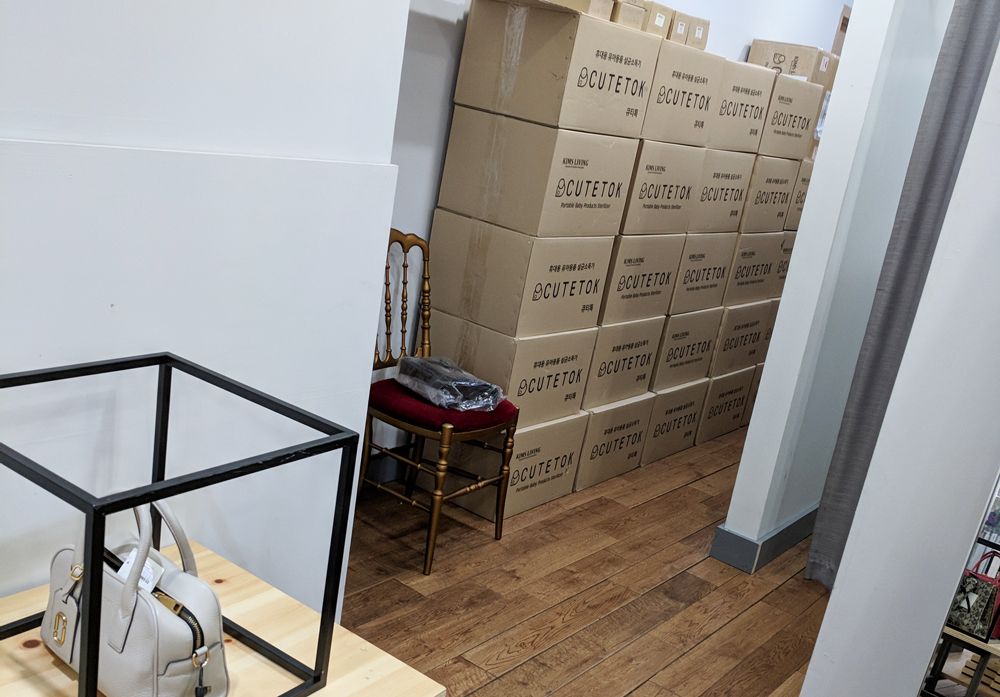 Jenny Odell is an artist and critic whose Bureau of Suspended Objects report on dropshipping (previously) was a fascinating dive into the weird, scammy world of crapgadgets and farcically poorly made fashion items sold through a network of "influencers" and turnkey ecommerce tool.

Now, Odell has stumbled into a much weirder, much scammier, much murkier world, when she started investigating the parents of one of her Stanford students were receiving a steady stream of mysterious packages addressed to "Returns Department, Valley Fountain LLC."

This network is tied in with the religious cult that turned out to be the mysterious acquirers of Newsweek, whose subsequent shenanigans were revealed by Newsweek's own reporters, leading to police raids.

This cult -- centered around Olivet University and an evangelical pastor named David Jang -- is also implicated in the International Business Times, as well as weird spam- and clickbait-mills.

After Odell's extensive investigation, it's still not clear what, exactly, the fuck is going on with all these businesses, LLCs, storefronts, online storefronts, stock-art shoops, and other mysterious practices. What is clear is that someone is making a lot of money, somehow -- giant Manahattan department stores don't come cheap!

Trying to map the connections between all these entities opens a gaping wormhole. I couldn’t get over the idea that a church might be behind a network of used business books, hair straighteners, and suspiciously priced compression stockings — sold on Amazon storefronts with names like GiGling EyE, ShopperDooperEU and DAMP store — all while running a once-venerable American news publication into the ground.

While I searched for consistencies among disparate connections, the one thing I encountered again and again on websites affiliated with those in the Community was the word “dream.” “Find the wooden furniture of your dreams” (Hunt Country Furniture). “Read your dreams” (Stevens Books). “Our company is still evolving every year, but our dream never changed” (Everymarket). “The future belongs to the one who has dreams; a company with dreams achieves the same” (Verecom).

Indeed, at some point I began to feel like I was in a dream. Or that I was half-awake, unable to distinguish the virtual from the real, the local from the global, a product from a Photoshop image, the sincere from the insincere.

Still harder for me to grasp was the total interpenetration of e-commerce and physical space. Standing inside Stevens Books was like being on a stage set for Stevens Books, Stevens Book, Stevens Book Shop, and Stevensbook — all at the same time. It wasn’t that the bookstore wasn’t real, but rather that it felt reverse-engineered by an online business, or a series of them. Being a human who resides in physical space, my perceptual abilities were overwhelmed. But in some way, even if it was impossible to articulate, I knew that some kind of intersection of Olivet University, Gratia Community Church, IBPort, the Newsweek Media Group, and someone named Stevens was right there with me, among the fidget spinners, in an otherwise unremarkable store in San Francisco.

A Business With No End [Jenny Odell/New York Times]