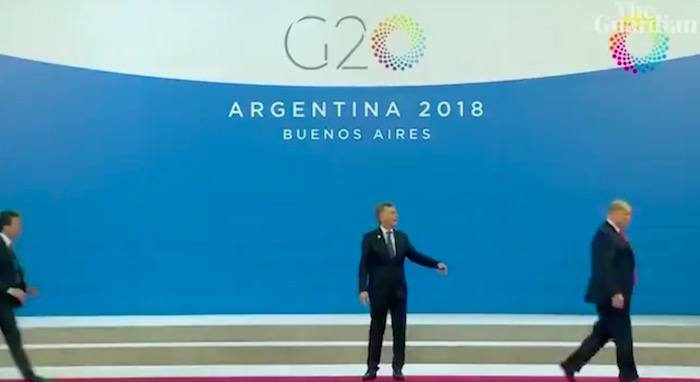 On stage at the G-20 summit on Saturday, Trump suddenly wanders off, for no apparent reason, leaving the president of Argentina standing alone. A staffer runs after him, trying to corral him back. We then hear Trump on a hot mic saying, "Get me out of here." The Guardian captured it on video, which @TopRopeTravis tweeted here:

Trump just wandered right off the stage, leaving the Argentinian president all by himself.

A staffer is then observed attempting to stop and retrieve Trump.

But this is nothing new. Watch how Trump zombie-steps away from Prime Minister Netanyahu last year in Israel. Yikes.

Is Donald sleepwalking around the G20 or something pic.twitter.com/COsL2mHu1O