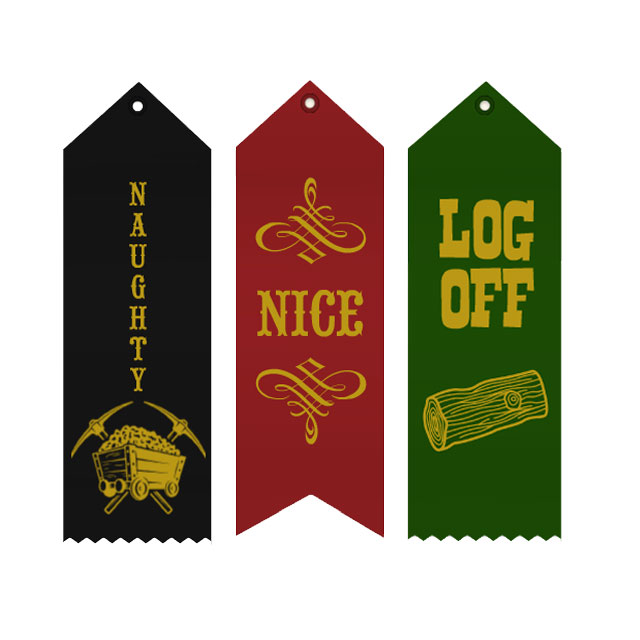 Hey, I started something new. When I'm not blogging for Boing Boing or publishing my inbox zine, I'm busy crafting ways to take over the world. I mean, I'm busy trying to think of fun side hustles for myself. The first "hustle" out of the gate is Chicken Dinner Prize Co, a site I whipped together that sells award ribbons for grownups. Yes, I know there are other sites that make similar items but they all seemed to be geared to millennials. I thought it would be fun to make award ribbons for grownups like me, i.e. the more "middle-aged but still full of childlike mirth" variety.

Since it's December, I decided to start with holiday-themed ribbons. I missed out on Hanukkah because it was so early again this year. But I was able to get out some Christmas ones. In the photo, you'll see the "Naughty," and "Nice," as well as "Log Off." I thought it would be amusing to hang one or the other (both?) on someone's stocking and have them discover it. I also thought they could be used as fancy gift tags or even bookmarks. I also made a ribbon with a saying my 14-year-old daughter SJ thought of: "Drunk on Eggnog." We both thought was funny. The final one speaks to that line between naughty and nice, "Nice-ish."

I'll be making more (non-holiday) ribbons in near future. I have TONS of ideas ("I survived my mid-life crisis!" with clipart of a dumpster fire, for instance). Now, if you have an idea for one, drop me a line. No guarantees it will make the final cut but I'm happy to entertain even the wackiest of ribbons. If I end up using yours, I'll send you one as a prize.