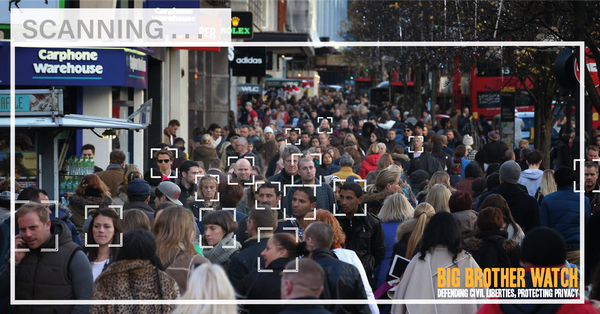 People in Soho, Piccadilly Circus, and Leicester Square are being told by the London Metropolitan Police to submit to a trial of the force's notoriously inaccurate, racially biased facial recognition system, which clocks in an impressive error-rate of 98% (the system has been decried by Professor Paul Wiles, the British biometrics commissioner, as an unregulated mess).

The cops are handing out notices telling people they can opt out without being treated as suspicious.

The pressure group Big Brother Watch is suing to end the practice, and crowfunding the suit -- they could use your donations.

These real-time facial recognition cameras are biometric checkpoints, identifying members of the public without their knowledge. Police have begun feeding secret watchlists to the cameras, containing not only criminals but suspects, protesters, football fans and innocent people with mental health problems.

Big Brother Watch has joined with Baroness Jenny Jones to demand an end to the police's use of real-time facial recognition cameras. Baroness Jones, a member of the House of Lords, fears that she could end up on a facial recognition watchlist when conducting her parliamentary and political duties. A photo of her was held on the Met's "domestic extremism" database and her political activities were monitored while she sat on an official committee scrutinising the Met and stood to be London's mayor.

However, facial recognition cameras mean that even if you're not on a police database now, you could be soon. Thousands of biometric photos of innocent members of the public who aren't even on these secret watchlists are being taken and stored too following incorrect matching.