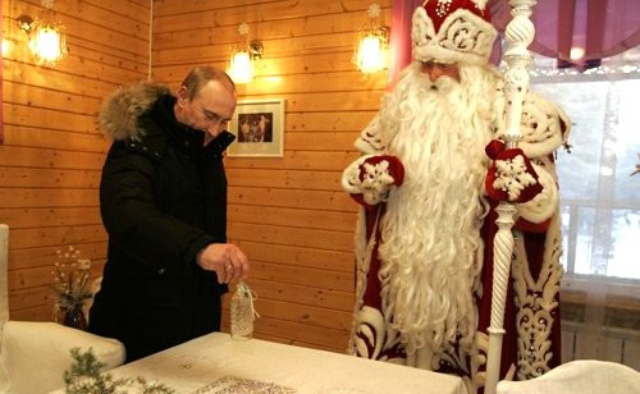 Navigating the topic of death with a young child can be a difficult, traumatic experience for parents, especially if the topic is broached by the sudden loss of a loved one. Trying to explain death to a kid because they watched Santa Claus pass away right before their eyes? That's a higher level of awful.

According to The Moscow Times, a group of kindergarteners from Siberia were celebrating the season with a Christmas party, attended by Santa or rather, one of the jolly old fellow's Eastern European iterations, Ded Moroz. A bit of background: Ded Moroz, which translates as Father Frost, was originally celebrated/feared in pre-slavic lore as a wizard or a snow demon, and over the centuries became a central figure in the region's celebrations of the New Year and Christmas.

Anyway, back to the awful.

As part of a school play, Ded Moroz, played by 67-year-old Valery Titenko, danced his way across the stage, until he didn't. Dressed in Ded Moroz's long red, fur-fringed coat, Titenko suffered a heart attack and fell to the ground.

From the Moscow Times:

The group of kids apparently thought that Titenko’s fatal collapse was part of his skit and began giggling. A woman dressed as a clown who was also part of the skit noticed Titenko’s fall and rushed to help him.

Titenko was rushed to the hospital but died before he could get there.

According to The Moscow Times, Titenko was aware of his poor health and had been feeling dreadful earlier in the day. Despite this, he decided that showing up as Ded Moroz was the thing to do. If he'd canceled his appearance, the kids would have been disappointed.