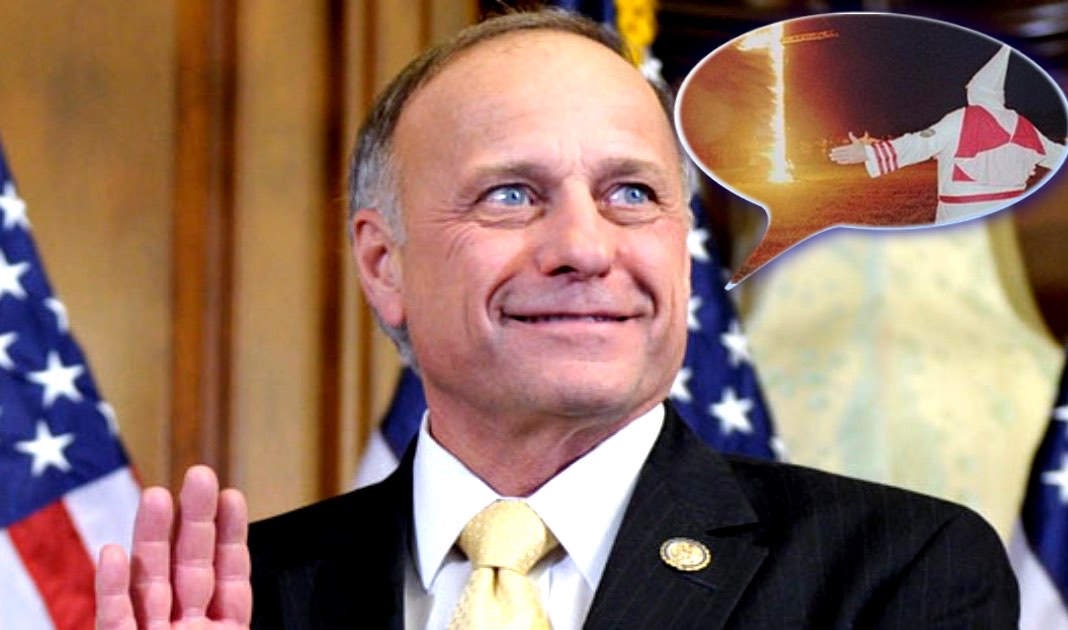 You've gotta read, by Douglas Burns, this excellent roundup of a dozen or so of the worst things congressman Steve King (R-IA) has said, dating back decades.

Notable that these long, long predate the latest “why does racism have such a negative stigma” remarks that got him in trouble, and ultimately led to his removal from various powerful committees in Congress this week.

“I'm a western Iowa newspaper owner who has chronicled @SteveKingIA and his troubling remarks for 2 decades,” tweeted Burns. “His latest comments, the ones generating national controversy, wouldn't even make my Top 10 list of most distressing Steve King comments.

Wow. Some of these I hadn't seen before.

Did you know, or do you remember, that in 2005, King came out as a fan of red-baiting asshole Sen. Joseph McCarthy, calling him a “hero for America?”

King still defends the statement. Christ, what an asshole.

Excerpt from Burns' roundup of awful Steve King quotes, which is truly a top 10 list for the ages:

In July of 2006 King went to the House floor to display the model of a wall the Kiron Republican said he personally designed for the U.S. border with Mexico and likened illegal border crossers to the farm animals.

“We need to do a few other things on top of that wall, and one of them being to put a little bit of wire on top here to provide a disincentive for people to climb over the top or put a ladder there.” King said in displaying his design. “We could also electrify this wire with the kind of current that would not kill somebody, but it would be a discouragement for them to be fooling around with it. We do that with livestock all the time.”

5. Terrorists will be ‘dancing in the streets’
In an interview in Spencer, before the 2008 presidential election, King said, “I’ll just say this, that when you think about the optics of a Barack Obama potentially getting elected president of the United States — and I mean, what does this look like to the rest of the world? What does it look like to the world of Islam? And I will tell you that, if he is elected president, then the ... the radical Islamists, the ... the al-Qaida and the radical Islamists and their supporters will be dancing in the streets in greater numbers than they did on Sept. 11.”

6. King compares homosexuals to unicorns and leprechauns
In a Dec. 12, 2003, news release about Sioux City Judge Jeffrey Neary’s decision to grant two lesbians a divorce King said the following: “Unless I am mistaken it was in Vermont, not Iowa, that Howard ‘The Coward’ Dean slyly signed midnight legislation making same sex unions legal. Unicorns, leprechauns, gay marriages in Iowa — these are all things you will never find because they just don’t exist. But perhaps Judge Neary would grant divorces to unicorns and leprechauns, too.’”

7. King earns endorsement — for President of the United States — from right-wing hate-peddler Ann Coulter.
A columnist for Human Events Online, a national conservative publication, says celebrity right-winger Ann Coulter in the fall of 2006 recommended that the Republican Party consider King as its presidential nominee in 2008.

“Coulter supports a fence on our southern border and recommended the Republican Party consider Rep. Steve King from Iowa for the presidency in 2008,” Michael J. McCormack wrote after hearing Coulter speak at a Christian Coalition of Georgia event.

Rep. Tim Ryan told reporters that his censure of Steve King will be referred to the ethics committee and he will not object — meaning it wont get a vote.

Ryan said he was disappointed and feels that King “dodged a bullet” with the disapproval resolution.

As @MEPFuller notes, the timing of this coddling up to a racist, just after the censure of Steve King for being a racist, is batshit. https://t.co/39P332t7Cx

NEWS: Dem leaders are trying to stamp out a rank-and-file push to censure Steve King, worried about facing retaliation from Republicans and putting their own members in a tough spot.

Here's GOP reps @DrPhilRoe and @RepAndyHarrisMD meeting with Holocaust denier and white supremacist #ChuckJohnson today. So much for that "denouncing white supremacy" bullshit from Republicans. #votethegopintoextinctionhttps://t.co/Q6pBhGX5KN

That is definitely Chuck Johnson. And that means a day after allegedly condemning white supremacy & Steve King on the House floor, some Republicans are walking into the House with.... a Holocaust-denying white supremacist. Fucking amazing. https://t.co/JIG3sHkIBS