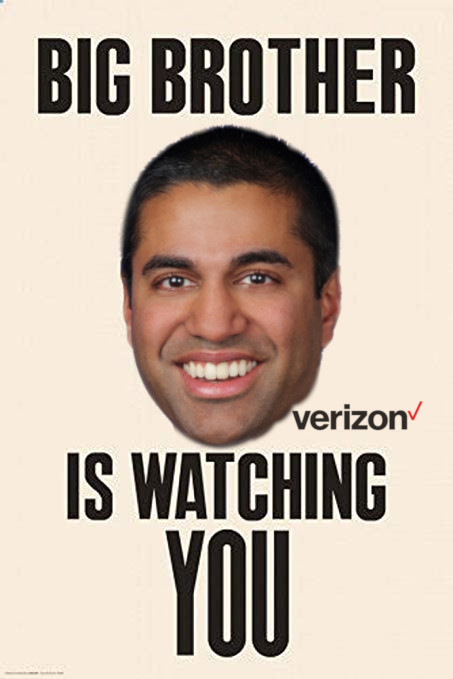 Motherboard's blockbuster story about mobile carriers selling your realtime location data into a marketplace where bounty hunters and other villains can buy it for just a few dollars has triggered an urgent, national conversation about the fact that, in the year since the first stories about this emerged, the carriers have not only failed to live up to their promises to put a stop to it, but seem to have made it even worse.

So naturally, the Congressional committee that oversees the FCC -- which regulates the carriers -- wants to be briefed on this so that they can do their job, serve the American people, and get this situation under control.

But to do that, they need to hear from Ajit Pai, the former Verizon executive whom Donald Trump installed as Chairman of the FCC. And Pai says he's staying in his office with his giant novelty Reese's mug, and Congress can go fuck themselves, because there's a shutdown on, and this isn't "a threat to safety."

What's more, the FCC committee that has been investigating this issue has stopped all work, because again, having the location of every US cellular phone owner being tracked in realtime and sold for a few dollars to any scumbag with a credit card "is not a threat to safety."

"Today, FCC Chairman Ajit Pai refused to brief Energy and Commerce Committee staff on the real-time tracking of cell phone location[s]," Pallone said in a statement yesterday. "In a phone conversation today, his staff asserted that these egregious actions are not a threat to the safety of human life or property that the FCC will address during the Trump shutdown."

Pai's office defended the decision when contacted by Ars today. The FCC "has been investigating wireless carriers' handling of location information," an FCC spokesperson said. "Unfortunately, we were required to suspend that investigation earlier this month because of the lapse in funding, and pursuant to guidance from our expert attorneys, the career staff that is working on this issue are currently on furlough. Of course, when the Commission is able to resume normal operations, the investigation will continue."

Pai's decision was criticized by FCC Commissioner Jessica Rosenworcel, who is part of the FCC's Democratic minority.

"Your wireless phone location data is being sold by shady entities that you never gave permission to track you," Rosenworcel wrote in a tweet. "That's a personal and national security issue. No law stops the @FCC from meeting with Congress to discuss this right now. It needs investigation."