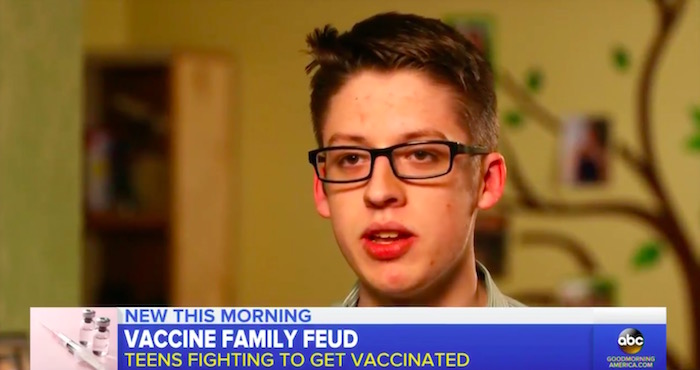 A teen's Reddit post went viral when he asked the public how he could get vaccinated. "My parents are kind of stupid and don't believe in vaccines. Now that I'm 18, where do I go to get vaccinated? Can I get vaccinated at my age?"

The Ohio high school student, Ethan Lindenberger, says he had just gotten his driver's license and a car, and had some money, and was ready to defy his parents. "It's stupid and I've had countless arguments over the topic. But, because of their beliefs I've never been vaccinated for anything, god knows how I'm still alive."

A month after his post, he started getting shots, including "hepatitis A, hepatitis B, influenza and HPV," according to The Huffington Post. His mother reacted by telling undark.org that his actions were like a "slap in the face...It was like him spitting on me.”

Lindenberger has six siblings, and only his oldest sister and brother were vaccinated. After that, his parents thought that "vaccines are some kind of government scheme," according to Ethan, who spoke out on Good Morning America today.

"I've never been vaccinated for anything, God knows how I'm still alive." An Ohio 18-year-old went against his anti-vaxx mother's beliefs and fought to get vaccinated when he turned 18. @LinseyDavis reports. https://t.co/7uPNW231Zv pic.twitter.com/P8IFBev1rv

Seven states now allow minors to petition so that they can make their own decision when it comes to vaccinations. But in the states where kids don't have a choice, some teens are coming to Ethan for advice. “I definitely have received messages and I’ve had people contact me that are in a similar situation where they want to pursue vaccinations and their parent or authority figure doesn’t believe it’s right,” he told Good Morning America.

An increase of 41 measles cases were reported in the United States from the previous week.