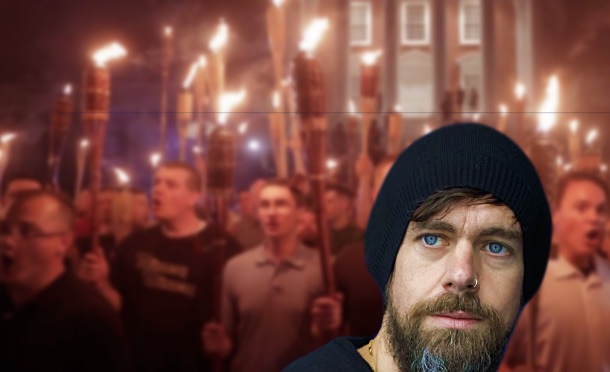 Why haven't Jack Dorsey and other executives running Twitter figured out how to "ban the Nazis"?

They'd have to ban Donald Trump.

Because if they regard white supremacist terrorists the way they regard users who claim to represent ISIS or al Qaeda, that “would mean autobanning some Republican politicians” like Donald Trump, with whom Dorsey met earlier this week, closed door, surprise!, didn't tell anyone about it in advance.

From Jason Koebler at Motherboard today:

At a Twitter all-hands meeting on March 22, an employee asked a blunt question: Twitter has largely eradicated Islamic State propaganda off its platform. Why can’t it do the same for white supremacist content?

An executive responded by explaining that Twitter follows the law, and a technical employee who works on machine learning and artificial intelligence issues went up to the mic to add some context. (As Motherboard has previously reported, algorithms are the next great hope for platforms trying to moderate the posts of their hundreds of millions, or billions, of users.)

With every sort of content filter, there is a tradeoff, he explained. When a platform aggressively enforces against ISIS content, for instance, it can also flag innocent accounts as well, such as Arabic language broadcasters. Society, in general, accepts the benefit of banning ISIS for inconveniencing some others, he said.

In separate discussions verified by Motherboard, that employee said Twitter hasn’t taken the same aggressive approach to white supremacist content because the collateral accounts that are impacted can, in some instances, be Republican politicians.

The employee argued that, on a technical level, content from Republican politicians could get swept up by algorithms aggressively removing white supremacist material. Banning politicians wouldn’t be accepted by society as a trade-off for flagging all of the white supremacist propaganda, he argued.

Read the whole piece:
Why Won’t Twitter Treat White Supremacy Like ISIS? Because It Would Mean Banning Some Republican Politicians Too.

We can frame this the opposite way, too: Filters designed to target ISIS overban, but mostly affect people without the political leverage to make this awkward for the company. https://t.co/nOdkcgaBEu

NEW: We have reporting inside Twitter that explains why Jack hasn't "banned the Nazis:" Treating white supremacy like ISIS would mean autobanning some Republican politicians https://t.co/2VmUpqzM7p