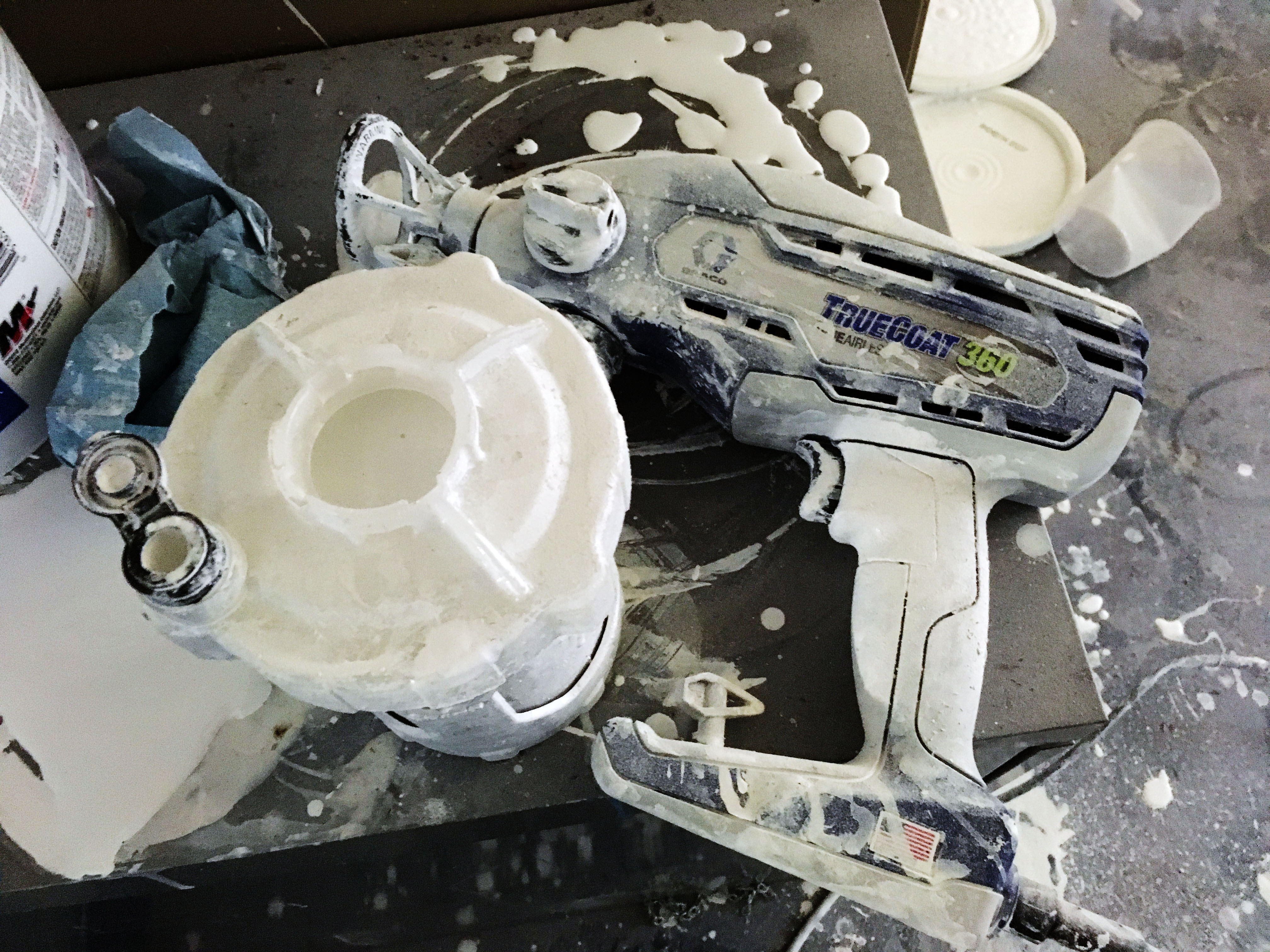 The Graco TrueCoat 360 airless paint sprayer [Amazon link] is perfect for quickly blasting fences, decks and items of furniture out in the yard. But it—and other devices like it—are bad news indoors, creating a fog of paint that demands such perfect taping-off of everything that little time is saved and much hassle is risked.

I got one to brighten up my dingy basement. With a vast surface area in porous rafters and beams to prime and paint, the backbreaking tedium of rollers and brushes was too much to consider.

The sprayer got a good job done quickly, but it wasn't easy—and was so messy that I hope never to have to do it again. That said, now I've got this thing, I find myself quite eager to paint the heck out of other things with it. Just not a thousand square feet of bone-dry wooden sponge, all directly above my head.

The sprayer is the size of a large cordless drill and comes with two easily-swapped tips, one creating a 4"-wide fan and the other covering 12" (from 12" away). The spray cone is very flat; you can angle it whichever way you like by twisting the neck. A one-quart jug feeds it paint and is emptied in a few minutes with uninterrupted use. A fancier model has variable speeds and comes with a slightly larger jug; this basic model just blasts it out at full pressure.

The results came thick and fast. It seems almost like magic: a finished coat materializing instantly under the muzzle. On smooth surfaces, airless sprayers create a factory-finish texture so perfect you have to take into consideration that any rolled or brushed touch-ups will be glaringly obvious.

There is some technique involved, but you'll figure it out quickly: maintain a 90° angle, overlap strokes neatly, don't rake the same spot over and over. It's like mowing a lawn.

Here's the problem: wasted paint goes absolutely everywhere. Mess comes both as wet overspray bouncing off the target and a fine mist that drifts and settles upon everything it encounters. Anything untaped or untarped will get a sticky dusting, so taping and tarping becomes an extensive and non-negotiable part of your prep. The sprayer itself, and you, will inevitably get a coating as the job goes on. Working without a respirator would be madness.

Refilling is especially annoying and messy, too, turning big jobs into a grossly repetetive chore. It's not just the slime: you have to carefully squeeze out the air with each bladderful and you won't know you screwed it up until you get started and it sputters to a halt after a few seconds' use.

A patient, time-rich operator willing to clean it each refill might be able to keep the mess under control, but if you're using a sprayer you probably aren't that person! The process of unscrewing the jug, releasing it, refilling it, reattaching it, tightening it, squeeze-priming it, blasting the paint onto things for a few minutes, then repeating the process over and over ... you and the device will soon be thoroughly spooged.

Frankly, I'll be damned if I ever use this thing again indoors. Working in finished, occupied living space would be even harder: you'd have to tape and tarp entire ceilings!

So, yes to fences, decks and items of furniture you can drag out onto tarp in the yard. And to blasting new construction or empty basements. But anything else, stick with rollers.

You might be tempted to get a cheaper non-airless model, such as those by Wagner. Pass. They're much slower, yet otherwise just as gross, and you have to thin many paints.