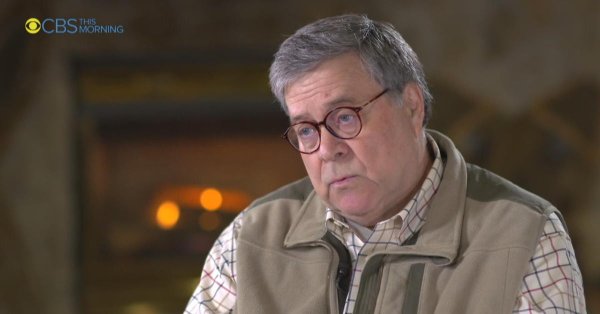 If Donald Trump's bag man Bill Barr weren't such a malevolent son of a bitch, this wild quote of his from a CBS News interview would sound something like wisdom.

“Everyone dies and I am not, you know, I don't believe in the Homeric idea that you know, immortality comes by, you know, having odes sung about you over the centuries, you know?"

They're some soul-less bastards, these Trump administration slimeballs.

Asked by CBS News' Jan Crawford about concerns over his reputation for defending the president amid ongoing probes into the administration's alleged ties to the Russian government and claims that Mr. Trump obstructed justice, Barr appeared indifferent.

"I am at the end of my career," Barr said. "Everyone dies and I am not, you know, I don't believe in the Homeric idea that you know, immortality comes by, you know, having odes sung about you over the centuries, you know?"

Barr, who previously served in the George H.W. Bush administration, is only the second attorney general in history who's served in that capacity twice. The first was back in 1850.

He said he knew it would "only be a matter of time" that he would be attacked for what he considers is "behaving responsibly and calling them as I see them." He argued "nowadays, people don't care about the merits and the substance."

"They only care about who it helps, who benefits, whether my side benefits or the other side benefits, everything is gauged by politics. And as I say that's antithetical to the way the department runs and any attorney general in this period is going to end up losing a lot of political capital and I realize that and that's one of the reasons that I ultimately was persuaded that I should take it on because I think at my stage in life, it really doesn't make any difference."

When asked if he had any regrets for taking the job, Barr told Crawford: "No."

Watch a preview here, and read the rest of the transcript.