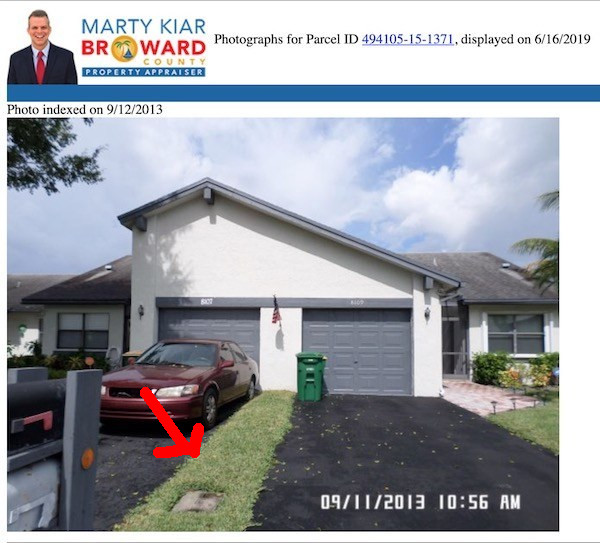 A combination of hubris (failing to heed the stern warnings that bidders should only participate if they know what they're doing), cryptic annotations and confusing illustrations resulted in a bidder buying a 12" wide, 100' long strip between two properties in Broward County, Florida -- an odd parcel that had been formerly owned by the developer, who folded and stopped paying tax on it, sending it to the auction.

The buyer thought he was buying the "villa" next to the property, which is valued at $200,000; apparently so did the other bidders in the auction, who bid up the strip of grass to $9100.

All sales in the auction are final, but the buyer is trying to get out of his purchase.

On the other hand, it is strange that this piece of turf was ever defined as a separate “parcel” at all. It seems more likely there was a mistake in defining the adjacent parcels, and this strip was just left over. According to the report, it still belonged to the subdivision’s developer until that company dissolved and stopped paying the taxes. The unhappy buyer apparently has some internal memos in which county officials ponder the oddity of selling a 1′ x 100′ strip of land that runs under someone else’s building, but they decided the relevant statutes required them to put it up for auction. So far as I can tell, nothing in the statutes precluded them from adding a little note about the weird circumstances here, but they chose not to do that. They may have assumed one or both of the villa owners would buy it, but neither did. Nor do they want to buy it now, or at least they’re not interested in paying $9,100 for it. “If we have to move our mailboxes,” one said, “we’ll move our mailboxes.”

Auction Winner Learns Why Property Was Such a Great Deal: It’s Only 12 Inches Wide [Kevin Underhill/Lowering the Bar]