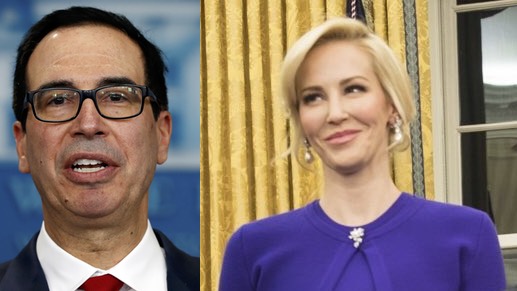 From the Los Angeles Magazine piece:

Do you travel with a ton of security these days?

Only when my husband’s around. Every time he goes out he has to travel in this endless motorcade. A bunch of Secret Service guys trail him when he comes to L.A. But when he leaves, they all go with him, leaving me utterly alone. (Laughs.) There are even these little yellow kits equipped to handle emergencies and explosions that come along when Steve’s in town, and then, poof, they disappear as soon as he leaves. No one’s really all that concerned about saving me! (Laughs.)

Just about! They especially like coming to SoulCycle. They take all the bikes around Steve and just pedal away! One day when we were there Perez Hilton was also there. He later wrote a dumb item blasting us for taking so much security on the taxpayer dime. I wanted to call him and say, “You know we don’t make our own security decisions, Perez? These decisions are made for us!”

Oh yeah, and Mnuchin is trying to take control of the Secret Service.

THe United States Secret Service is a federal law enforcement agency under the Department of Homeland Security.

The Secret Service used to be under the control of Treasury.

In 2003 under the Bush administration, and a couple of years after 9-11, the Secret Service was moved to the Department of Homeland Security.

Mnuchin has been pushing Trump to back the move, administration officials told the New York Times.

The discussions between the Treasury Department, the White House and high-ranking Secret Service officials have taken place over the past year and have intensified in recent months, as Mr. Trump has pressed homeland security officials to focus on stemming immigration and ousted some for failing to do so.

The president supports the idea of moving the Secret Service back to the Treasury Department, where it was housed until 2003, according to people familiar with the discussions. The agency, which had been part of Treasury for more than 100 years, was transferred as part of the Homeland Security Act, which sought to consolidate security agencies after the Sept. 11, 2001, attacks.

And pay attention to this part:

Some senior officials at the Department of Homeland Security have been pushing back against the move, concerned about losing an agency that has cybersecurity and investigative components. The department, which oversees the Cybersecurity and Infrastructure Security Agency, is responsible for protecting the country against cyberattacks and ensuring election security, in addition to enforcing immigration law.

After collaring a woman who got past security at Mar-a-Lago (described by Chris Hayes as President Donald Trump’s “bribery palace”) the Secret Service found a USB drive in her possession. So they stuck it in a computer to see what was on it. From the Miami Herald: Secret Service agent Samuel Ivanovich, who interviewed Zhang […]

The latest Secret Service challenge coin (previously) commemorates Trump's shutdown (which has nearly 1,000,000 people going without pay, and has undermined everything from air travel to the ability of poor people to eat and pay rent), bearing the legends "Essential Personnel" and "Don't Worry, You'll Get Backpay." Perhaps SS agents can pay their rent by […]