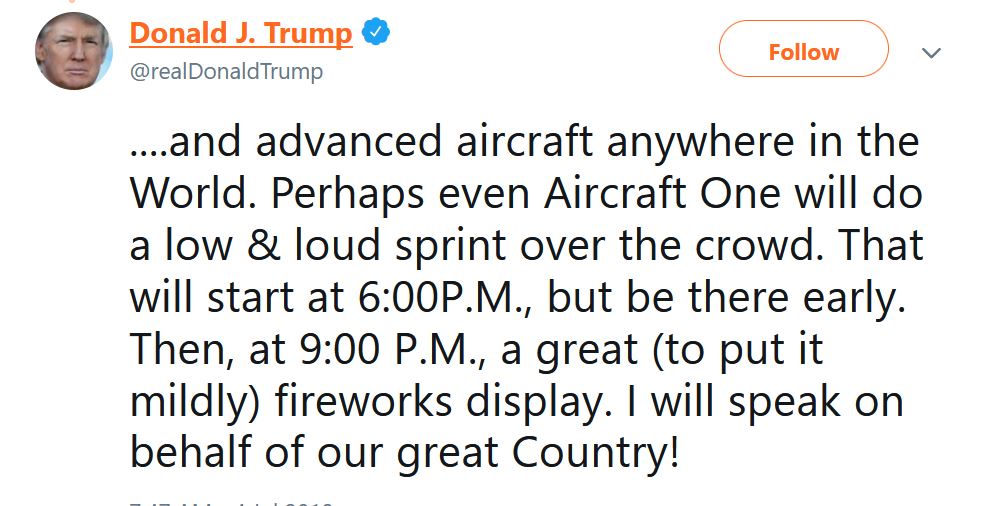 The President's ride is called Air Force One. What, then, is "Aircraft One?"

People are coming from far and wide to join us today and tonight for what is turning out to be one of the biggest celebrations in the history of our Country, SALUTE TO AMERICA, an all day event at the Lincoln Memorial, culminating with large scale flyovers of the most modern.....

...and advanced aircraft anywhere in the World. Perhaps even Aircraft One will do a low & loud sprint over the crowd. That will start at 6:00P.M., but be there early. Then, at 9:00 P.M., a great (to put it mildly) fireworks display. I will speak on behalf of our great Country!

Google suggests it's meaningless and offers no exact results for the term from 2010 to 2018.

I can help. I'm Adjunct Professor at Trump Univ Dept of Aeronautics & Planey Things. Aircraft One was the Wright Brothers' (Wilbur & Steven Wright) first airplane. It was a biplane, steam powered and invisible. It was lost in an unfortunate accident while investigating oranges

Elements of Resistance Twitter claim that it's an unofficial term for the Russian President's jet, but I was was unable to find evidence of that in English news reports, at wikipedia or in machine-translated items from Russian news and the Kremlin.

There is, however, a Russian documentary by that name about Putin's plane, as referred by Andrew Feinberg.

For those who are curious, there’s a Russian state TV documentary about Putin’s plane (available on streaming services) called “Aircraft One.”

I did, however, learn that Самолеты 1 (Aircraft 1) is the Russian language title for the Walt Disney animated feature film "Planes."

Searching for the term at Twitter gets you one of Andy Borowitz's mirthless imitations of The Onion, virtually indistinguishable from intentionally fake news:

A TV Journalist with ABC and FOX affliates in Columbus suggests that it's a term used when the President is on board:

*Technically, it’s only called Aircraft One when the President is on-board https://t.co/vjCsOxAnTt

$92m for a draft-dodger's military parade! Tanks in the capital and concentration camps on the borders. God bless America.