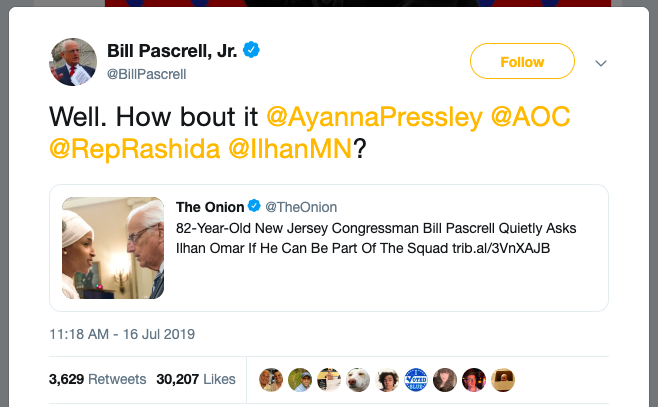 1) Earlier on Tuesday, humor website The Onion ran a spoof story titled '82-Year-Old New Jersey Congressman Bill Pascrell Quietly Asks Ilhan Omar If He Can Be Part Of The Squad.'

2) Then, Congressman Bill Pascrell Quietly Asked Ilhan Omar If He Can Be Part Of The Squad.

4) Speaker Nancy Pelosi, this is how it's done.

82-Year-Old New Jersey Congressman Bill Pascrell Quietly Asks Ilhan Omar If He Can Be Part Of The Squad https://t.co/IYjR7dUBGn pic.twitter.com/geJwuXz34F

Quinnipac University published a new poll today showing Biden with a 15 point lead over Donald Trump. Biden leads 52% to 37%, according to those polled. Biden’s share increased by three points and Trump’s fell four points since last month’s sample, which placed them at 49% to 41%. It’s the first time Biden has exceeded […]