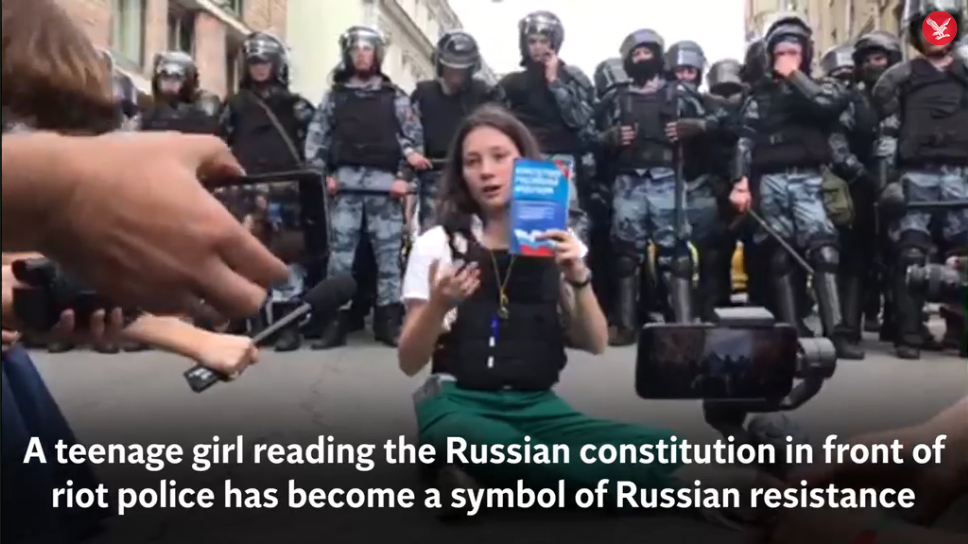 Article 31 of the Russian constitution guarantees the right to peaceful political assembly, which is why Russian opposition protesters like to wave copies of the constitution around as Putin's goon-squads descend on them to dole out savage beatings and mass arrests.

On Saturday, a 17 year old woman from Moscow named Olga Misik sat down in front of a line of armed, locked and loaded riot cops and quietly read the constitution to them, setting up a photo-op of the genre that includes Tiananmen Square’s Tank Man, Taking a Stand in Baton Rouge, and the photos of a pigtailed, defiant Greta Thunberg standing alone in the cold before the Swedish legislature.

Misik was part of a protest over the banning of leading opposition politicians from upcoming municipal elections in Moscow. She says that after the protest, she was beset by riot cops who beat her up and then arrested her. She faces charges for "attending a public event which was held without filing a notice."

Misik is an articulate spokeswoman for protest, grounding her action in a wider context: "Injustice always concerns everyone. Today the Moscow City Duma, tomorrow the governor of the region, a week later the head of the Resurrection District. It is only a matter of time. It is foolish to think that this is a rally only for free elections or the admission of candidates. This is a rally in defence of elementary constitutional rights that would not be questioned in a democratic state."

The pictures and videos of Misik reading to the riot squad have become a rallying point for the opposition.

Misik's father is a Putin supporter.

The teenager herself, whose own father is a supporter of Mr Putin, was allowed to walk away after the reading, but was later arrested by police as she walked to a subway station.

“They did not introduce themselves, did not explain the reason and grounds for detention,” she said.

“There was not a rally or a crowd of people in this place. They grabbed my arms and legs and dragged me down the street and through the underpass … I screamed that they were hurting me, but they told me that they knew better.”