What does writer and human guinea pig AJ Jacobs keep in his bag? 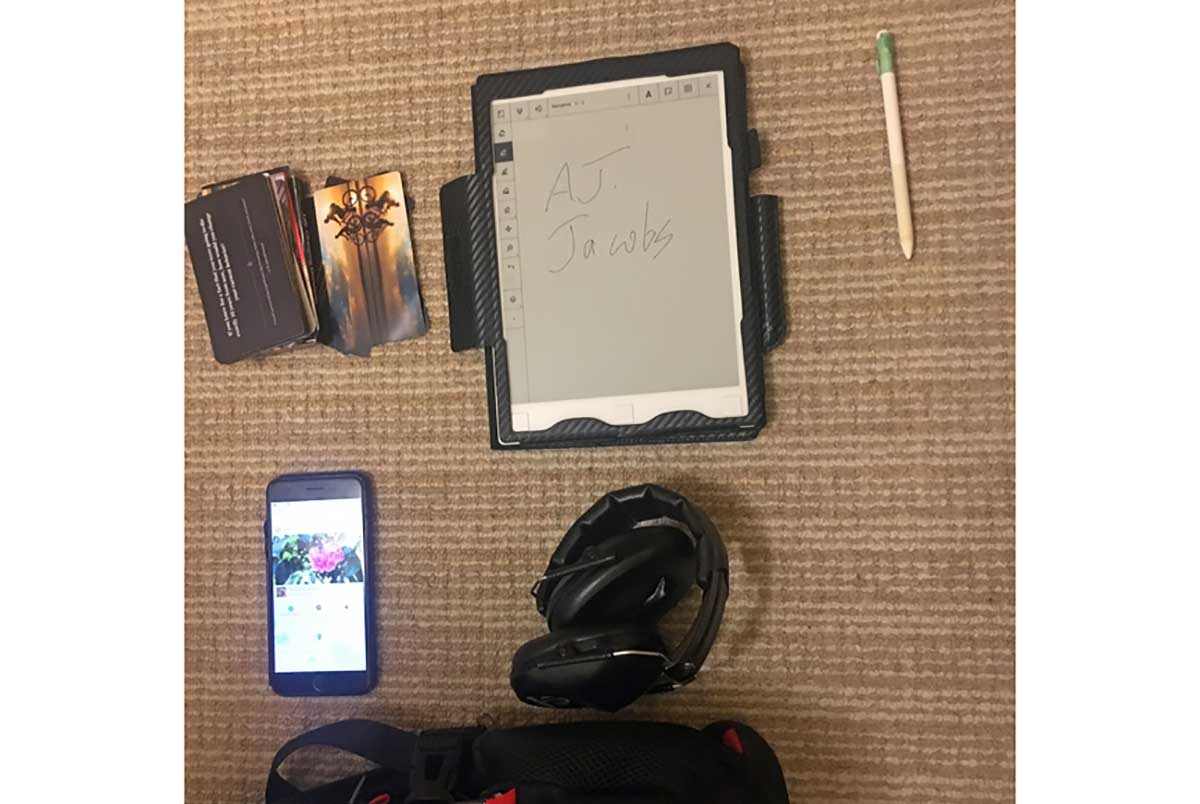 In the latest issue of the What's in my bag? newsletter (published by Cool Tools, which I edit), my friend AJ Jacobs talks about four things he keeps i his bag:

A.J. Jacobs is a writer, lecturer and human guinea pig. He is the author of four New York Times bestselling books, including “The Year of Living Biblically” and “The Know-It-All.” He is a contributor to NPR, the New York Times and Esquire magazine and is a frequent TED speaker. His most recent book is “Thanks a Thousand.”

Life Changing Questions ($24)
My friend — the social scientist and mathematician Spencer Greenberg — developed a deck of cards he calls “Life Changing Questions.” And they are just what they sound like. Each card has a Big Question printed on it (e.g. “What have you changed your mind about?” or “What would you do if you had one week to live?”) Spencer’s research shows these questions are the ones his test subjects find most valuable in reassessing their lives. I like to break the cards out at dinner with my family and use them as conversation prompts. They are much better than arguing over screen time.

ReMarkable ($499)
This is an unusual tablet. Its main purpose is to allow you to take handwritten notes on the impressively paper-like interface. It’s too expensive for what it is, but I still recommend it because it’s helped reduce my habit of having dozens of spiral-bound notebooks strewn about my office. It makes it much easier to find notes I’ve taken in meetings or while brainstorming. Caveat: One of the breakthrough technologies with ReMarkable is that it has a machine-learning handwriting recognizer that can turn your handwriting into digital text. Mine stopped working after a week and hours with tech support hasn’t fixed it. But I still like the gadget.

Walker’s Earmuffs
A few years ago, I bought a pair of Bose noise-cancelling headphones. Then I lost them and bought another pair. Which I then broke and bought another. At which point I decided I had to give them up or go broke. (They cost about $300). Instead, I’ve switched to Walker’s noise-reducing earmuffs. They muffle sound remarkably well. Perhaps not quite as well as Bose, but good enough for me to wear them in airplanes, subways, walking down the street. I often wear my iPhone earbuds with the Walker’s earmuffs over them, and the sound is fantastic. Plus, the Walker’s black version doesn’t look as dorky as some other earmuffs I’ve tried, which look like equipment you wear on the tarmac at a major airport.

iNaturalist
Okay, this isn’t a physical tool. It’s an app. But I love it so much I want to spread the word. It’s for anyone who is curious about flora and fauna. The way it works is: You take a photo of the animal or plant, and upload it. The algorithm tries to identify the animal or plant. Better yet, the thousands of others in the iNaturalist community weigh in with confirmations and comments. I’m particularly proud of my son’s brown anole lizard photo from Florida, as you can see the little guy’s bright orange neck.