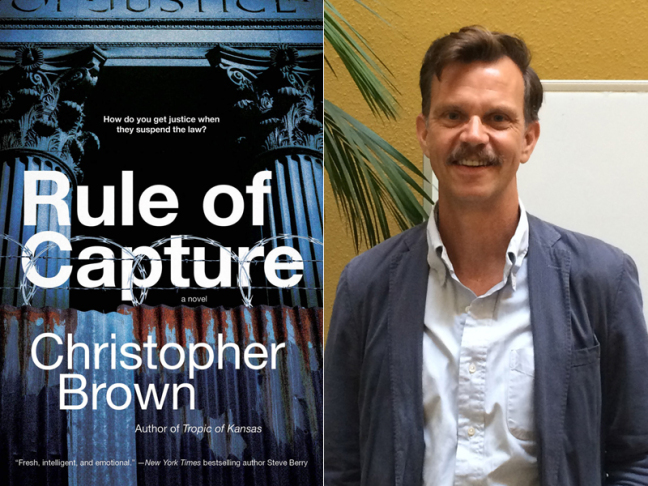 It's a longform interview, and Brown digs into the oddity of both the law and legal fiction, the way that sf has so few lawyers, the weird precision of legal jargon, and the surprising (and haunting) number of books on administering martial law available at his local UT Austin law library.

Brown is a fascinating figure, and his thoughts on how sf works and what it says about our current dystopian world make for a terrific interview.

Rule of Capture is a unique legal thriller. Brown is rigorous in his world-building. There’s no shiny extrapolated technology to magically blast in. Instead, the author applies his excellent powers of extrapolation to the law, finding Reagans far more threatening than lasers. The world is bristling with danger. It’s an open-carry paradise, with all the horror we currently hide from ourselves striding in the unpleasantly bright sunlight. Donny’s an interesting and compelling character, surrounded by the sort of sleaze we get to read about on a daily basis. He’s likable but inclined to deceive himself when it comes to what sort of help he can provide. He sympathizes with his rebellious clients, but blinkers himself into the belief that the law is here to protect them, even when it is clear the law will not protect even him.

Brown knows how to score point after point for the reader, though. Rule of Capture has a bit of the feel of a horror novel, and readers will enjoy following Donny down into the legal equivalent of the cellar beneath the haunted house. We know it’s a bad idea and we know that Donny expects it is as well. But we sure as hell love to hope with him. Rule of Capture eventually reveals just what the title is about, as Donny finds he’s on the train that’s carrying his clients. Brown is a master of law-twisting terror, and every page threatens to show us a headline from the world we live in as opposed to the one we hope we are only reading about.

Rule of Capture takes the toolbox of technological science fiction and uses it to rebuild the legal thriller, crafting a reality that seems more pertinent to what’s going on around us than mere descriptions can possibly manage. It’s compelling and gritty, and imaginative enough to capture all the terrible things you know or have heard about and put that puzzle together. Is the result a mirror? We hope not, thinking hope, if not the best, may be our only weapon.