Target has a scratchable haunted house for cats 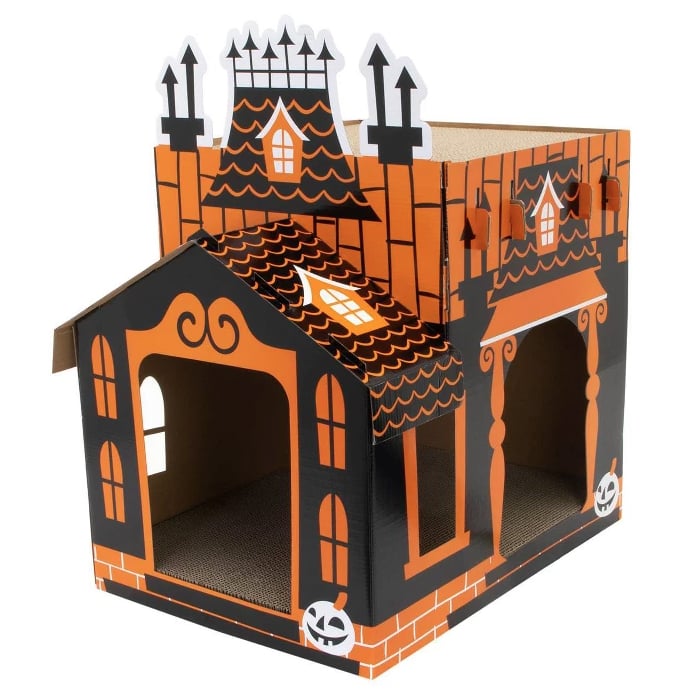 Cats are possessed so it makes sense that Target has made a scratcher that looks like a haunted house! You can get this two-story cardboard Haunted Mansion from Target's Halloween Hyde & EEK! Boutique ($16.99).

It’s a spooky chateau for your favorite cat (black or otherwise) – just in time for Halloween! Frightful and delightful, the Deluxe Haunted Mansion from Boots & Barkley™ is where your pet will be wanting to spend all her time. It’s two stories of entertainment, with a spacious cove on the bottom complete with scratch pad built into the floor. The perfect perch to keep an eye on the room is up above. Even better, the entire set assembles in just a few easy steps. The only thing not included are spirits to haunt the place, but your cats will have a scary amount of fun nonetheless.

The cats of the internet seem to take to it just fine:

Welcome to Sinatra’s Halloween crib 🎃 Got this cute scratchy house from Target! Super easy to put it together and so cute! 😻 😻 😻 #sinatrathesiamesecat #sinatra #kittiesofinstagram #kitty #fatboy #kittyboy #halloweenkitty #spoopykitty #targethalloween

The replacement of Lamp Cat’s jaunty YouTube Music Library track with Era Ameno turns a stupid feline warming its head under a lightbulb into the seraphim Baraqiel, its ceaseless gaze bearing the eternal fire of God’s light.

Is it real, or is it Memorex? screengrabs via CuteVN Animals