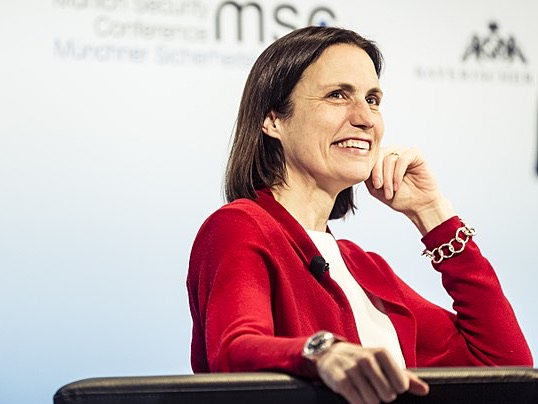 Donald Trump's former Russia adviser Fiona Hill is reported to have agreed to testify before three House committees on Monday, October 14, in the Democratic impeachment inquiry.

Bloomberg was among the first to report the news on Thursday morning, citing two House officials familiar with the plans.

Her plans to testify also pose a key test for whether congressional committees pursuing an impeachment inquiry can obtain testimony from other former officials who have left the administration, given the possibility that the White House may try to assert executive privilege to stop them from testifying.

Hill plans to say that Giuliani and Sondland side-stepped the proper process for accessing Trump on Ukraine issues, the person familiar with her expected testimony said, including circumventing John Bolton, who was Trump’s national security adviser until September.

Text messages recently released by Congress showed Sondland, Giuliani and former U.S. envoy for Ukraine Kurt Volker working to facilitate Trump’s goal of getting Ukrainian President Volodymyr Zelenskiy to commit to investigate the president’s political opponents — and making a White House visit for Zelenskiy contingent on such a commitment. Official notes from Trump’s call with Zelenskiy released by the White House showed Trump asking the Ukrainians to work directly with Giuliani, and NBC News has reported that Sondland was also in direct contact with Trump about Ukraine. Sondland’s attorney didn’t immediately respond to a request for comment. Giuliani and Sondland’s attorney didn’t immediately respond to requests for comment.

Hill, through her attorney Lee Wolosky, declined to comment.

EXCLUSIVE: Fiona Hill to testify to Congress that Giuliani, Sondland circumvented the NSC and normal White House process to run a shadow #Ukraine policy, a person familiar with her testimony tells @NBCNews

Hill’s planned appearance next week before the House has stoked fear among people close to the president, said a former senior White House official, given her central role overseeing Russia and Ukraine policy throughout most of the Trump admin.

Also a key test for whether House can get testimony from *former* officials despite threat White House may assert executive privilege.

NEW: The former US ambassador to Ukraine has told associates she was removed from her post after insisting that Giuliani’s requests to Ukrainian officials for investigations be relayed through official channels https://t.co/50W3whOwHd