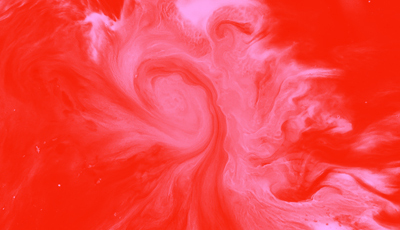 [Last spring, I ran into Nikola Richter at the Republica Festival in Berlin; she told me about Sina Kamala Kaufmann, a celebrated German climate activist and sf writer whose debut short story collection, Bright Matter, had been published by Richter's independent publisher Mikrotext to great critical and public success. I offered to run one of Kaufmann's stories here in English as a way of exposing her work to a new audience. -Cory]

They laughed and it really pissed me off.

"Every cell, please, every microbium." The female voice murmured softly from the tree house.

The three of us lay in the soft mud. The mud pressed heavily against my body. Could my skin still breathe like this? The fine earth around me was tender and firm. I lay on my back for a long while and submerged my head in the mud. It contracted around my body, covered me densely, it gurgled somewhat hollowly; and for a short while it hushed the cackling of the two women, who were bathing about four, five metres away from me in this artificially created mud lake in the deep Polish jungle. It was unlikely that they had come here voluntarily. I emerged from the mud again and felt it on my face, heavy between my eyelashes.

Both the intestinal rehabilitation and the microbial communication training took place in the same location within the dense forest. Some people could not leave here for a long time. The mud was thick, the sun squinted through the dark green leaves, the lake lay surrounded by the trees, some of them several hundred years old, reaching far into the sky above us.

I observed the three single clouds gliding slowly across the sky. The leaves rustled above my head in the mild summer wind and finally the cell clusters behind me listened within themselves and fell silent. When I inhaled, my body was pulled to the surface by my chest, and when I exhaled, I sank further into the mud. I could clearly sense my weight and I felt my spine, my buttocks, the back of my thighs, my calves, pressing themselves into the fine granules of moist, warm earth. We were lying in a mud-mix: earth from the home continent, from the Afar Depression, or the Albertine Rift, at any rate from the cradle of mankind, fine ash particles from the Japanese volcano on Cherry Blossom Island, from the Puyehue in the Andes, the Kilauea in Hawaii and the classic mud regions in Italy, from where the "fanghini" specially trained in the production of organic mud also originated. All these traditional healing earths from all over the world have been gathered here. We lay in the healing-mud-mix, and if we managed to reach a state of emptiness, to open ourselves completely, then we would become one with everything, we would perceive how our cells, our bacterial inhabitants interacted with those in the mud, we could remove our selves and become one.

If we succeeded in meditating at this sacred place of new disorder, we would return to everyday life with a further degree of freedom.

The experience of resonating on a bacterial level came very close to enlightenment.

While I continued to gaze up at the sky while lying on my back in the mud, my critical inner voice deduced that indifferent detachment and luminous omniscience were always rather difficult to distinguish from the outside.

The archaic upheaval had indeed raised some new questions.

"You are neither trapped in your mind nor in your body", the soft-subliminal voice of the shaman murmured again from the tree house above the lake.

I really must be stuck in an early transition program. In a beginner’s training course.

Why did she still use all those words, the language and categories of white men? "Mind" - "body" - "neither nor" - she could just let her body produce true sounds ... "trapped"?

She spoke to us almost as if we were binary fundamentalists and not simple practitioners.

"Better lose the whole mind," my inner voice suddenly became agitated and encouraging, "a half mind only causes confusion."

The ladies next to me in the mud laughed again.

I turned around, slid through the shallower mud at the edge of the lake like a crocodile and slowly moved towards the shore. I kept my head submerged up to my nose in the fine dark mass. I peered around with large, unpredictable, crocodile-like eyes. I turned my head, from the depths of my neck, just as crocodiles do. With my hands in the soft ground, I crawled further towards the shore, saw the smooth surface of the mud up close. My belly was already touching the ground from time to time. I bent my knees, pushed the firmer ground away, and remained in the mud with my body for as long as I could. Then I placed my feet next to my body, stood up, carefully stretched my knees and emerged from the lake, covered in a layer of mud. I was startled by the length of my legs, my sudden height and the unsettlingly airy atmosphere. I took a few steps on the solid forest ground until I reached a large moss island and laid my already drying mud-covered body on the soft moss, stretched my limbs, and heard the leaves in the treetops, now rustling even more clearly, the three clouds had changed their formation, two of the three were now almost out of sight.

Since 2013, Sina Kamala Kaufmann has been researching the societies of tomorrow while working as a communications specialist for development organisations and tech companies. Her aim was to explore what “social” and “individual” responsibilities may look like in the future. Her first fictional work, Bright Matter (Helle Materie) is one of the results of her explorations. Between 2012 and 2018, she drastically limited her social media presence to retreat from common attention and recognition systems while writing her utopian miniatures as independently as possible in forests, on farms, and in cities across Europe. She is an ecological activist and acts as the co-editor of the German edition of the Extinction Rebellion Handbook (Penguin), published by S. Fischer Verlag in September 2019.