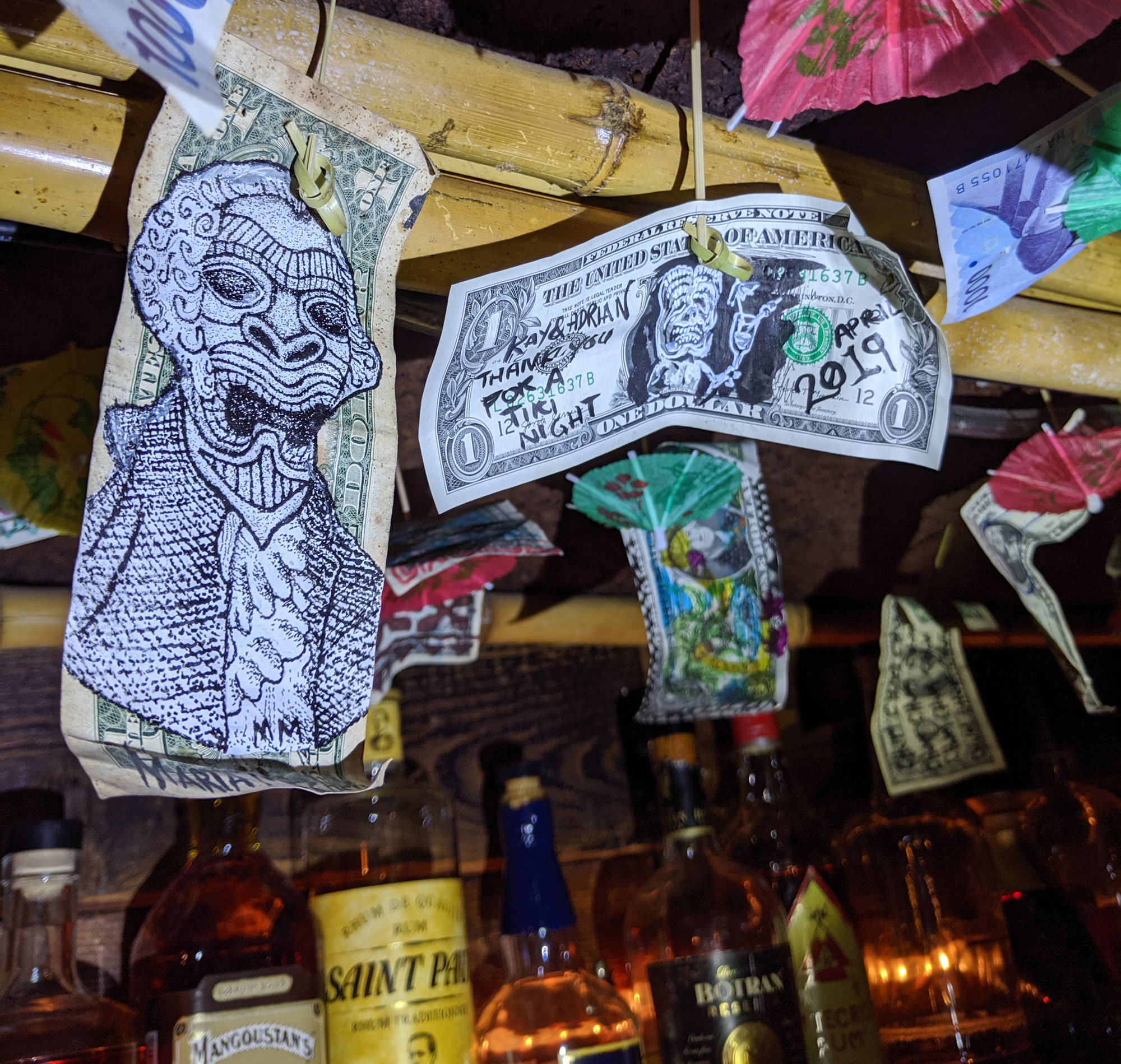 It was a bigger job than they had first realized. As it neared opening time, they had to stuff the cash in four big garbage bags to deal with at later time. "And it was a really dirty job. We had to wear gloves and face masks because there was layers of fire retardant and dust," reported General Manager John Peterson. When they got back to sorting and counting it, they were surprised to learn they had a significant amount of money on their hands.

Now, Forbidden Island's first dollar-bill-on-the-ceiling came with a story, from the gentleman who placed it. He told staff that the tradition dated back to World War II. "Servicemen headed to the South Pacific would have their final drink before being shipped out and stick a dollar in the bar's ceiling as a sort of a visual promise that they'd return home," recounted Thanos, "And when they did return, they would head to that same bar to find it."

(The United States Bartenders' Guild dates the tradition back to the California Gold Rush days.)

When the bar re-opened with a bare ceiling, some regulars were upset that their contributions had been removed. So when the Forbidden Island crew was deciding what to do with all the money, they kept them in mind.

"We wanted to be sensitive to the fact that our guests had memories and important dates attached to these dollars. We want them to know that we're going to do good with it. That's when we took a poll of the staff to select the top three charities," Peterson remarked.

Thanos and his staff believe charity begins at home, so they have chosen three local organizations to receive the bulk of the money. Over $8,000 will be divvied up between Building Futures, Friends of the Alameda Animal Shelter, and Alameda Family Services.

"Since the day we opened in 2006, we have been pro-Alameda in every way, from promoting Alameda causes and events to carrying Alameda-produced spirits and brews in favor of the big name international brands. So naturally we decided that the beneficiaries of our donation should be organizations that specifically benefit Alamedans in need," said Thanos.

To continue the goodwill, on Tuesday, November 26, the bar is having a pop-up benefit event, hosted by Tiki Lindy. All proceeds will be donated to Stand for Kindness, a charity that helps Northern Californian wildfire survivors.

The remaining nearly $2000 of the ceiling money will, well, remain. The more unique (decorated or otherwise) currency was put back on the ceiling.

Thanos shrugged, "In 10 years, or maybe sooner, I'm guessing we'll be pulling money off the ceiling again. And again, we'll do the right thing for our community."

Forbidden Island is located at 1304 Lincoln Avenue in Alameda, California.

If you go: Dress "Aloha," order a tropical drink, and bring some dollars to play the "Money Ceiling" game.

photos by Rusty Blazenhoff, except as noted