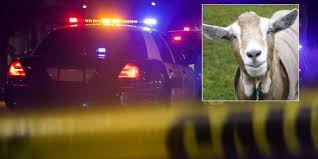 Maybe not the best place to hide your stash.

An elderly Alaska man was detained after authorities found him at an airport carrying $400,000 worth of heroin and methamphetamine stuffed inside frozen, rotten goat intestines.

Mr. Cenen Placencia, 71, of Kodiak, Alaska was arrested Wednesday at the Anchorage international airport, per authorities.

Investigators with Alaska State Troopers searched a large fish box the 71-year-old man had checked as luggage, according to an affidavit filed with the charges. Placencia gave his consent to search, according to the affidavit signed by a special agent with the Coast Guard Investigative Service.

Inside the box was loosely wrapped frozen meat, with multiple small pieces of meat frozen together, according to the affidavit, which says Placencia consented to the meat being thawed for further investigation.

Investigators smelled the odor of rotting meat as it thawed, and a police dog detected the presence of drugs, the affidavit says. Before the meat finished thawing, Placencia withdrew his consent for a search, prompting authorities to obtain a search warrant, the court document says.

Resuming the search, investigators found packages wrapped in plastic that contained about 740 grams of heroin and 389 grams of methamphetamine.

An affidavit says quantities of heroin, meth, and nearly $2,280 in suspected drug proceeds were seized from the man's home in March. The drugs cops found at his house aren't part of the current charges, assistant U.S. Attorney Christina Sherman told a reporter. The investigation continues.

Here is the full text of the DoJ release.

Anchorage, Alaska – U.S. Attorney Bryan Schroder announced that Cenen Placencia, 71, of Kodiak, was arraigned today on a complaint charging him with possession with intent to distribute controlled substances.

On Nov. 20, 2019, Placencia was ticketed to depart from Anchorage International Airport, destined for Kodiak, Alaska. Investigators from the Alaska State Troopers (AST) Anchorage Airport Interdiction Team (AAIT) requested Placencia’s consent to search his checked luggage, which consisted of a 47-pound fish box that was duct taped shut with a rope tied around the box.

After obtaining Placencia’s consent, the box was opened and investigators observed loosely wrapped meat pieces frozen together in a single large mass. The meat did not appear to be for human consumption, and packaging and shipping was inconsistent with the standard methods of meat processing. Investigators obtained Placencia’s consent to fully thaw and search the meat while he waited for the next Kodiak flight. As the meat was thawing, investigators detected an odor consistent with spoiled meat, no longer safe for consumption.

Placencia stated he purchased the goat for $140 from a rancher in California, packed the box himself, and intended to eat the goat intestines. Further, he denied having any knowledge of the meth and heroin found inside the goat.

If convicted, Placencia faces a statutory maximum of 40 years in prison, a $5,000,000 fine, and a minimum of 4 years of supervised release. Under the Federal Sentencing Guidelines, the actual sentence imposed will be based upon the seriousness of the offense and the prior criminal history, if any, of the defendant.

A complaint is only a charge and is not evidence of guilt. A defendant is presumed innocent and is entitled to a fair trial at which the government must prove guilt beyond a reasonable doubt.