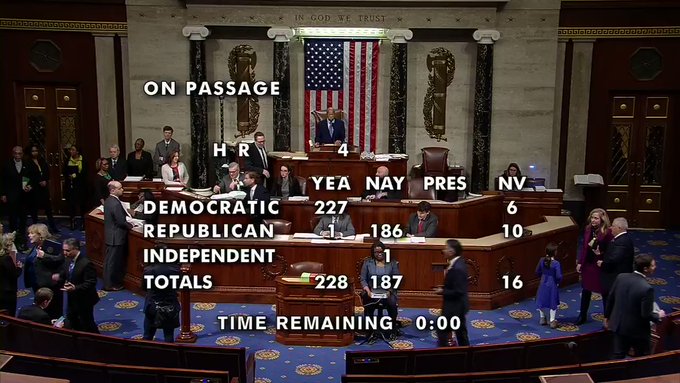 Advocates of vote suppression are not having a good Friday.

The House passed a package of bills aimed at restoring protections of the Voting Rights Act rolled back by a key 2013 SCOTUS ruling.

John Lewis—a former Freedom Rider who spoke at the 1963 March on Washington—sat in the chair to gavel in the final vote https://t.co/cqdpl5GdfG pic.twitter.com/wd6soGYJxO

All but a single Republican (Brian Fitzpatrick) just voted *against* the Voting Right Act (!) restoration bill in the House.

The right to vote is a cornerstone of our democracy. But the Supreme Court's decision to gut the Voting Rights Act has meant democracy denied for far too many eligible voters in America. Proud to have voted for #HR4, the Voting Rights Advancement Act, to protect & #RestoreTheVote https://t.co/OQy4xHwinS

The right to vote is the heart of American democracy. #HR4 restores the integrity of the Voting Rights Act, and I was so proud to vote for its passage today.

Every House Republican but one voted against restoring the Voting Rights Act overturned by five Supreme Court justices despite strong bipartisan support in both houses of Congress. Looking on was @repjohnlewis, who was beaten trying to secure that right.

The House just voted almost entirely along party lines to restore the central provision of the landmark 1965 Voting Rights Act. Walking back to the Senate side of the Capitol I spotted this sign. pic.twitter.com/yf6Nzz0Wuw

“The bill passed the House on a largely party-line vote, 228-187. Unlike in 2006, when the reauthorization of the Voting Rights Act passed the House by a vote of 390-33, only one House Republican... voted for the new bill.” https://t.co/FNz21MiSam

VICTORY: With @repjohnlewis presiding, the House has passed #HR4 to fully restore the Voting Rights Act of 1965 – a top priority for the civil rights community.

The Senate must take up this legislation immediately. Our democracy depends on it. #RestoreTheVOTE pic.twitter.com/q13jQBBhOs