Your toilet is your friend, these cool items can help you treat it like one 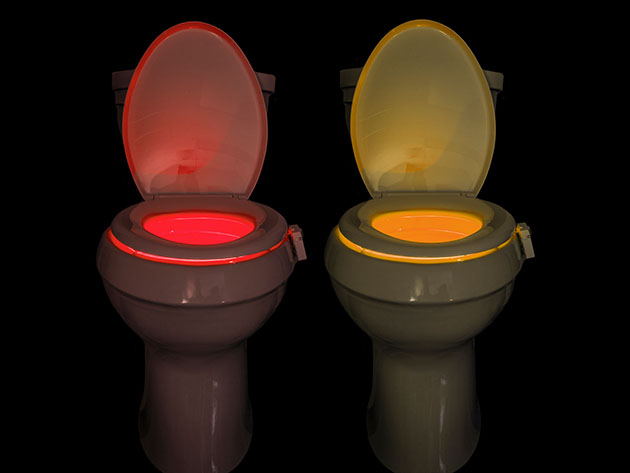 We all have at least one in our homes. We spend an inordinate amount of time with it. And we’d be lost without it. Yet the less we think about it, the better.

Yes, we’re talking about your toilet. And while you’d rather just ignore it, give it a moment of your time right now. And maybe even throw a dollar or two it's way. Because seriously...your throne needs some love.

Below, you’ll find 10 different items designed to make your time in the WC a little more pleasant. Just consider it for a second. It’s the least you can do for the porcelain god that does so much for you.

The GlowBowl helps you avoid the shock of turning on bathroom lights in the middle of the night. In addition to a rainbow of color options, this motion-activated LED light that hooks just inside your bowl also has 5 different dimmer settings, so you’ll never end up blinded by your 2 a.m. bathroom excursions. And since most houses have at least two bathrooms, this 2-pack means you’re set.

If dimmer settings don’t matter, but size does, the illumniBowl might be your toilet nightlight of choice. As seen on Shark Tank, this bowl light clocks in about half the size of the GlowBowl has eight different light colors and an improved motion sensor.

Here’s a toilet light with a true higher calling. When you stumble into the dark black bathroom, this baby’s simple green light means the toilet seat is down, while a red light means the seat is up. In households engaged in an eternal seat war, this unassuming helper could be a massive gamechanger.

If you’ve got a kids’ bathroom and want to take a different approach to the toilet light situation, how about just the soft shimmer of a bullseye target or a poo emoji projected right into your darkened bathroom’s toilet bowl? Clip the IllumiBowl projector to the top of your toilet tank and it projects one of four fun images right where groggy users need to go.

When a simple wipe just isn’t enough, the Alpha One is on the case. This easy to attach bidet seat comes with front and back retractable self-cleaning nozzle heads and a simple chrome lever spray pressure control, letting you choose between a light spritzing or a deep cleansing blast.

In addition to an extra wash mode, the GX Wave offers a few interesting additions for those looking for a little more oomph in your bidet, including a very clever hybrid heating system to offer a steady supply of warm water. And who wants to air dry? The GX Wave sports a warm air dryer that’ll immediately cut your typical drying time in half.

If you want the Rolls Royce of bidets, the Swash 1400 has luxury in its name for a reason. With programmable user settings including a one-touch auto mode, oscillating and self-sterilizing spray nozzles, a deodorizer, a nightlight, and even a heated seat to go along with the warm air dryer, this is the accept-no-substitutes bathroom experience.

Humans were engineered to squat in order to evacuate their bowels, not sit like the standard toilet posture. This toilet stool corrects that wrong, offering a simple ramp design for your feet that puts you in a comfortable squatting position while you do your business, thereby improving your digestive health. And if that wasn’t enough incentive, it’s got a built-in foot massager that’ll truly make you want to visit the bathroom.

The LUMI not only sweeps germs and bacteria out of your bowl — the aluminum reflective base greets the returning brush with a blast of natural germ-killing UV light. This set doesn’t just spread the E. coli around, it knocks it dead, then automatically turns itself off until your next usage.

Consider Flushie your pre-emptive strike against bathroom foul stench. One spray before you use the facilities and this powerful formula kills the lingering odors that can make the whole room unusable for hours. This 3-packs gives you about 300 sprays worth of stank-destroying peace of mind.