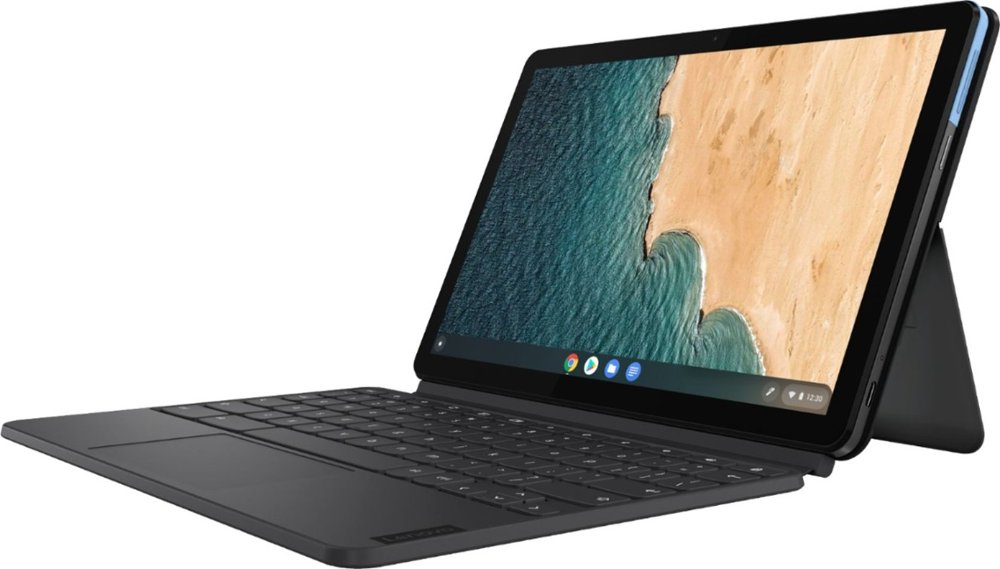 Lenovo's new Chromebook Duet is only $2801, but it's getting excellent reviews from sources that are usually lukewarm on low-end gadgets running Google's operating system. The 10" convertible tablet isn't going to muscle out a Surface Pro or iPad Pro, but it doesn't feel cheap.

The Verge's Monica Chin: "It feels much more like a Surface Go with some concessions than it does an ultra-budget PC. ... Another area where the Duet is punching above its weight class: battery life. Lenovo claims 10 hours; I got close to 11 and a half, running the device through my typical workload of Chrome tabs and apps including Gmail, Twitter, Slack, Asana, Facebook, Docs, and Sheets."

Wired's Scott Gilbertson: "It's plenty fast enough for getting work done in the browser, sending emails, and other communications—even light photo editing (in Gimp, running via the Linux support) and document editing. I only started to see some slowdowns after having 15 to 20 Chrome tabs open with half a dozen Android apps running simultaneously alongside some Linux for Chrome OS apps."

Android Authority's Eric Zeman: "It's practically a steal ... Lenovo's little Chromebook isn't perfect, and in fact has a few significant drawbacks, but almost nothing else competes on value. With a price starting at just $279, few Chromebooks or tablets offer as much flexibility out of the box as the Lenovo Chromebook Duet."

PC Mag's Eric Grevstad: "The Chromebook Duet earns an honorable mention among Chromebooks for consumers and captures our Editors' Choice among Chromebooks for students. Besides being a bargain, it's a thoughtfully designed and well-crafted detachable, especially for Android phone owners; the tablet and its peripherals have the look and feel of a product costing much more. As you use it, you keep discovering things—from the cameras to the screen brightness—that are better than you expected. I wish it had a faster CPU, but I believe a lot of users will be very happy with it. "

Reminder: most Chromebooks can easily be switched to Linux.

1. Looks like the only place you can currently buy one of these is Best Buy, which offers the $20-more-expensive model with extra storage.