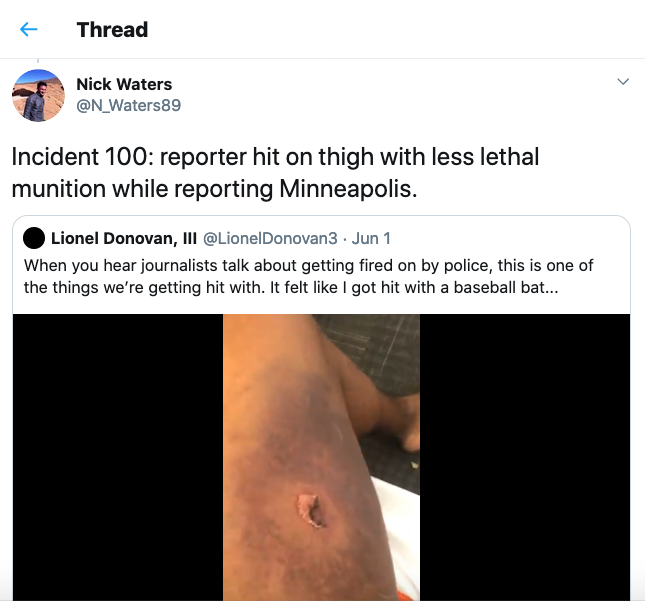 A comprehensive list of at least one hundred separate incidents in the past week where law enforcement was violent with press at protests over the police killing of George Floyd.

Over the past few days, Nick Waters / @n_waters89 of Bellingcat has collected over 100 photos and videos showing American police violently attacking credentialed reporters.

We've hit 100 incidents where journalists experienced violence from the police during the #GeorgeFloyd protests.

When I started this thread, I thought there would maybe be 7 or 8 examples. Instead what I have seen is a serious disregard for the free press by law enforcement. https://t.co/wBgYhVHmad

More at Mediagazer. Here are excerpts from the thread.

The third clear example of a news crew being deliberately targeted by law enforcement in the US I’ve seen.

Anybody else seen similar incidents? https://t.co/pzOWjQZru6

Incident 124: Journalists detained and prevented from filming and eventually released (I think in Richmond, Virginia) https://t.co/FWgC0XzKsW

A note on methodology: in this thread I have chosen to focus specifically on violence by law enforcement against journalists.

I've seen many of examples of egregious behaviour by police against demonstrators, by protesters against journalists, vigilantes against looters etc.

Going into tonight, here's our updated count on press freedom violations during the #GeorgeFloyd protests