Photos and videos of bugs and stuff with my USB microscope 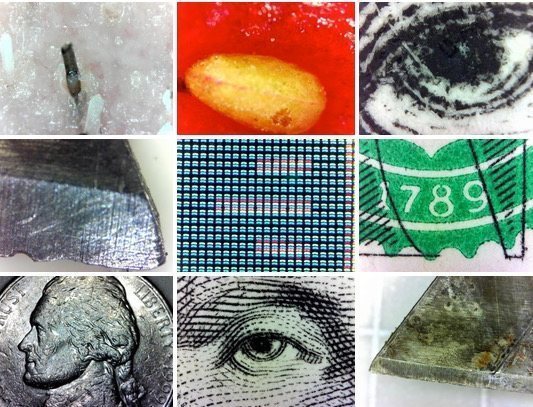 I bought a USB microscope a few years ago because I wanted to examine kitchen knife edges after I sharpen them using different sharpeners. I'm still having fun with it. The tiny millipede in the video above is in a cup the size of a penny. Here are some images I've captured so far:

A leaf, with what looks to be some kind of parasite.

Smaller than a prescription pill bottle, the microscope has a USB cord that can be plugged into any computer. Download the software here and start looking up close at money, leaves, circuit boards, bugs, skin, hair, and anything else.

The scope has a built-in, adjustable-brightness LED for illumination. The brightest setting is not always the best --- try different levels of illumination and let the software auto-adjust the contrast. I also learned that in order to see things at the maximum 250X magnification you need to follow the instructions in the FAQ.

It comes with a suction-cup gooseneck mount that is very stable, and a plastic board with a grid pattern, which helps you align and locate the thing you are looking at. You can also simply hold the scope against things. The software takes still photos and videos, and hasn't crashed on me yet (the earlier version was buggy).

For the price, the microscope is an amazingly entertaining device and I find myself grabbing it to check out all sorts of things, including splinters, skin cuts, bugs, and playing card designs.

Top row (left to right): One black whisker and many white whiskers on my chin, strawberry seed, George Washington’s eye on a $1 bill at 250X

Middle row: Snap blade knife at 250X, pixels on an iPhone 6 Plus display, seal from $1 bill