R Sikoryak's latest project is a word-for-word adaptation of the U.S. Constitution 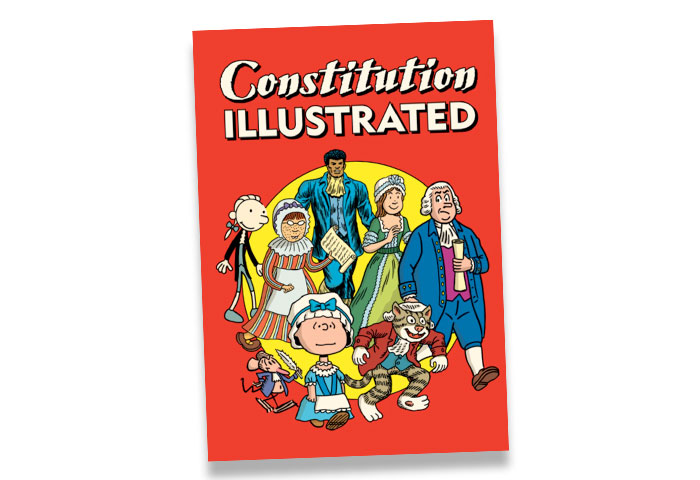 Cartoonist R. Sikoryak's talent for mimicking other cartoonists, from Krazy Kat's George Herriman to Nancy's Ernie Bushmiiler, is uncanny. He has a new book out, called Constitution Illustrated, published by Drawn & Quarterly and I have been marveling at the illustrations. The publisher kindly gave me permission to run some samples so you can see the versatility of Sikoryak's work.

A gifted pastiche and parody artist as well as a New Yorker cartoonist, R. Sikoryak's perhaps best known for his widely lauded graphic novel adaptation of the iTunes Terms and Conditions agreement, where each page referenced a different classic comic. It is a triumph of cartooning, one that demonstrated the power of the comics medium to make the unreadable into a text the average reader could engage with. While the Constitution is hardly so dense, Sikoryak transforms it by interpreting it within 100 years of American pop culture icons, all dressed in period attire, naturally!

The 13th Amendment is brought to life by Billy Graham's classic 1973 comic book cover for Luke Cage, Hero for Hire, drawn by one of the few Black cartoonists in the Marvel bullpen. The Boondocks explain the Fourth Amendment preventing seizure. Earlier on, Cathy reminds us that money drawn from the treasury must be appropriately accounted for publically. And it's pretty satisfying to see the cast of Alison Bechdel's Dykes to Watch Out For assemble in Section 4, as the Constitution lays out what meetings of Congress look like.