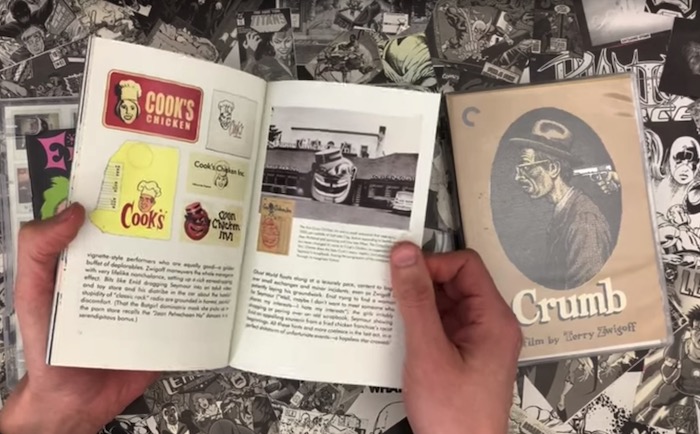 Cartoonists Ed Piskor and Jim Rugg take a look at the booklets that come with Criterion Collection's Crumb and Ghost World DVDs and Blu-rays, both directed by Terry Zwigoff. I've seen both films multiple times and already have the Crumb DVD, but I wasn't aware that Criterion did one for Ghost World. Sigh *pulls out wallet* Read the rest 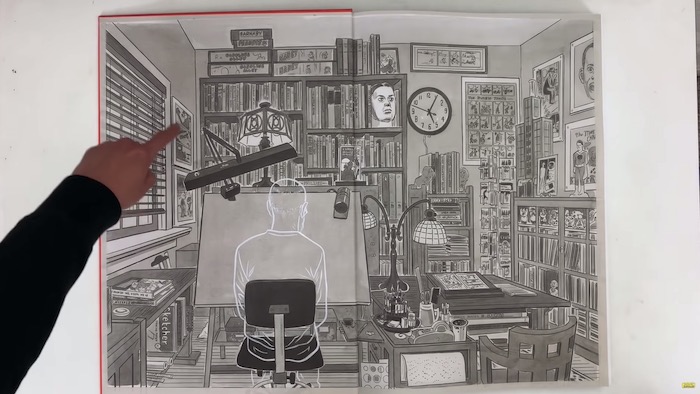 Cartoonists Ed Piskor and Jim Rugg take a page-by-page look at the upcoming Fantagraphics book, Original Art: Daniel Clowes. It measures a whopping 17 x 24 inches and has photos of Clowe's original art pages. I can't wait to get this book. You can pre-order a copy here. Read the rest 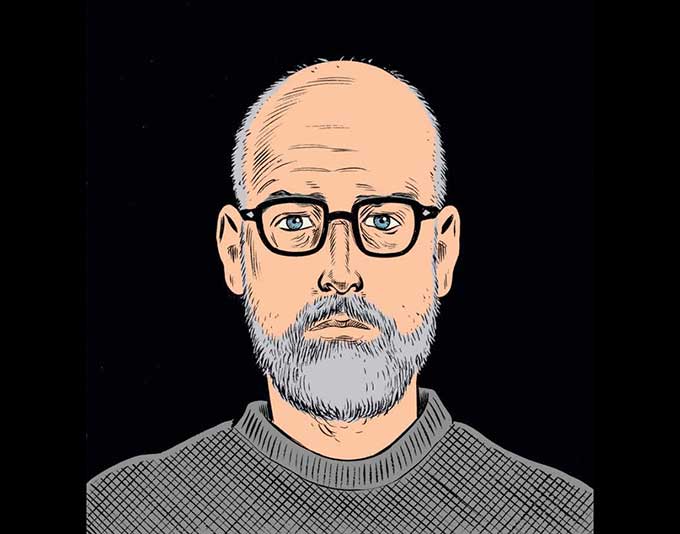 I had a great time interviewing cartoonist Daniel Clowes at Meltdown Comics in Los Angeles about his Complete Eightball anthology. This video was shot in glorious VHS by filmmaker Rocio Mesa and was produced by Gaston Dominguez-Letelier. Read the rest 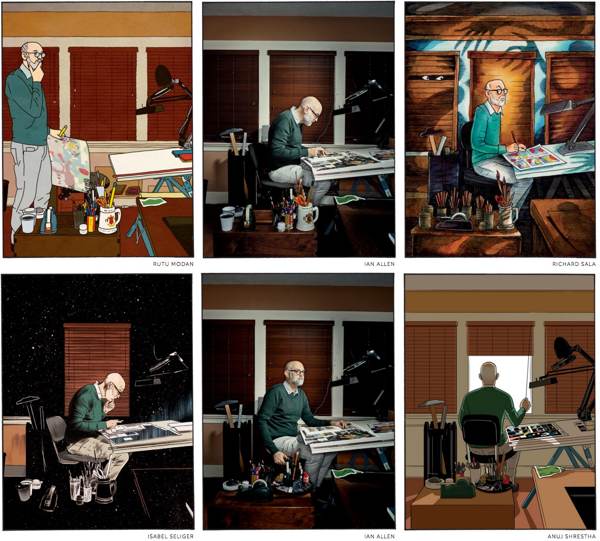 Robert Ito wrote a wonderful profile of cartoonist Daniel Clowes in California Sunday Magazine. It includes some nice illustrations of Clowes by other cartoonists.

In the third issue of Eightball, Clowes published “The Return of Young Dan Pussey,” a scathing takedown of the comics industry. In the strip’s satirical alternate reality, Marvel Comics founder Stan Lee is a glad-handing cheapskate with an eye for prostitutes, while Fantagraphics co-founder Gary Groth is a bully who consults a thesaurus mid-rant to come up with fresh ways to insult his artists. Art Spiegelman is a creepy, chain-smoking taskmaster who forces his stable of unpaid artists to create work for his comics magazine in a miserable hovel with burlap sacks for beds. “I just felt it was nasty, snotty, gratuitous,” recalls Spiegelman. Françoise Mouly, his Raw co-creator, says, “I became aware of [Clowes] as a wise­ass a long time ago.” Clowes has a different explanation. “Jealousy isn’t the right word, but I just had a longing to be a part of that world and had that feeling that I wasn’t,” he says. “It was sort of an expression of rage and self-pity and trying to make myself feel better about that.”

Who is Shia LaBeouf plagiarizing this time: rap group Anomolies 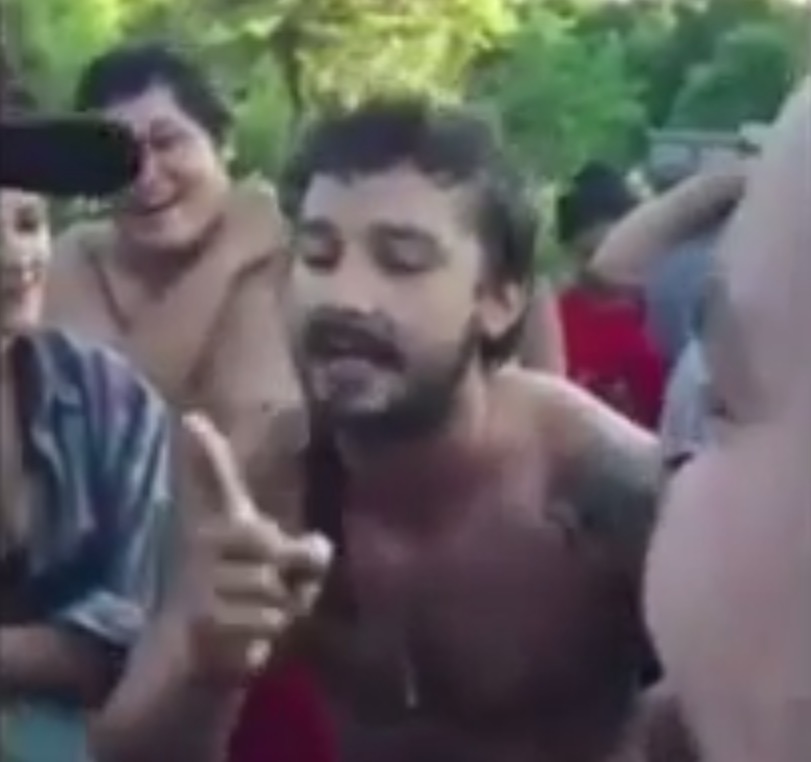 Remember when Shia LaBeouf plagiarized a Daniel Clowes comic book story almost word-for-word and made a short film about it? When he was found out, he tweeted a series of apologies, which turned out to be plagiarized, too. I interview Clowes at Meltdown comic in Hollywood last month and I asked him for an update about his experience with the serial plagiary. Here's the video, queued up to part in the interview where he talked about it:

Clowes explained that LaBeouf had powerful "motherfucker" lawyers who would have ground Clowes into hamburger, had Clowes not had his own motherfuckers to make sure LaBeouf paid Clowes for using his work without permission.

A few days ago LaBeouf released a video demonstrating his freelance rap skills. But it didn't take long for the original lyricist to come forth:

Rap group Anomolies called LaBeouf out on Instagram, claiming that his flow comes from their song "Perfectionist," which was written in 1999.

"You can't rip songs from my ANOMOLIES crew, recite them in a freestyle as your own, get credit for it, then not expect to be called out by ACTUAL MCs!" the post stated.

At the the 2:23 mark in his video LaBeouf hushes the crowd and says “The rare commodity, the quality is what it’s gotta be, and my philosophy is farther than what your eyes can see.”

However, on the 1999 track “Perfectionist” you can clearly hear Helixx spit at the 45 second mark, “I recon you want more of that rare commodity/the quality is what it’s gotta be/ and my philosophy is much farther than what your eyes can see.” 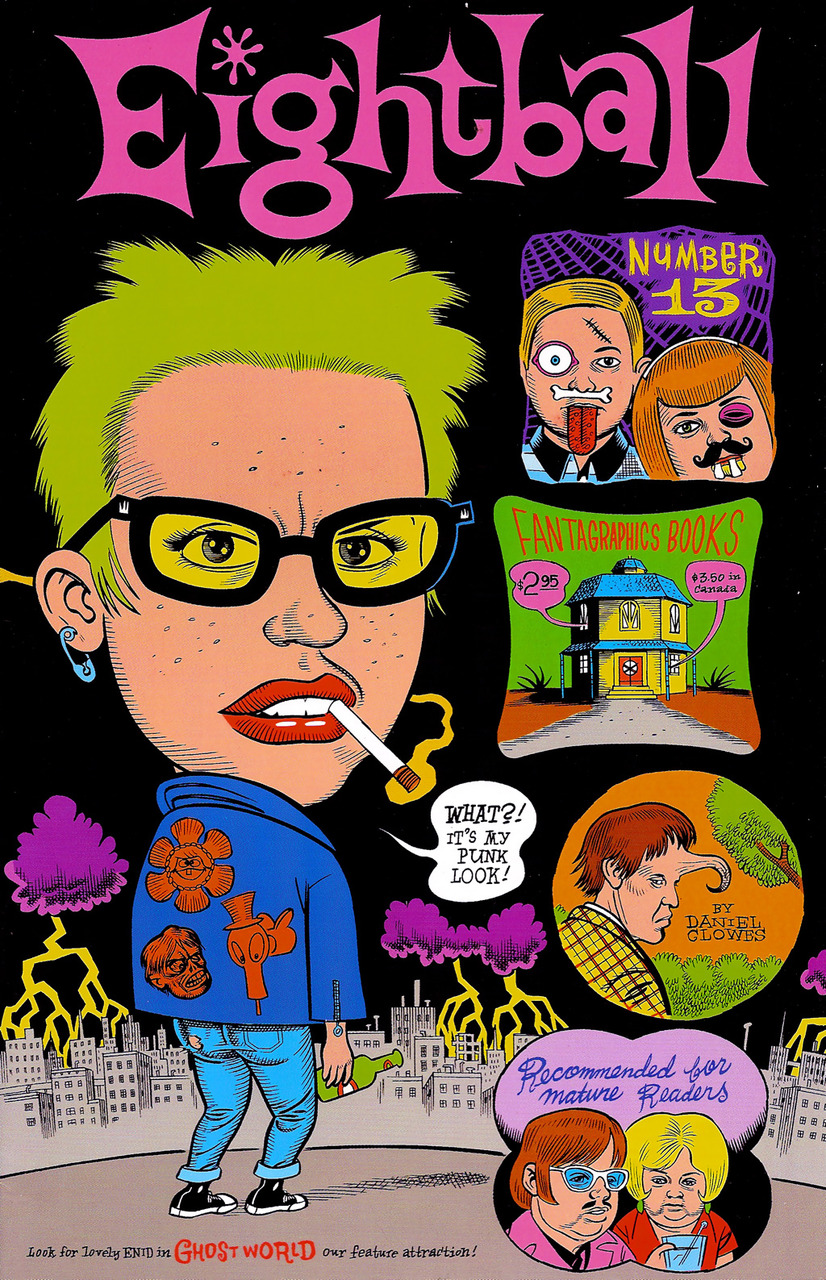 Last night I went to Meltdown comics in Hollywood to interview Daniel Clowes, the creator of Eightball, which is one of my favorite comic book series (check out the amazing new 25th anniversary slipcase edition of Eightball!). The room was packed, and Dan shared hilarious anecdotes about his career as a comic book artist and screenwriter (Ghost World, Art School Confidential). He could have had a career as a low-key standup comic in the vein of Bob Newhart.

Dan talked about his surreal experience with Shia LaBeouf, who plagiarized one of Dan's stories and issued a bunch of plagiarized fauxpologies. He also shared details about the upcoming movie Wilson, based on his graphic novel. Dan wrote the screenplay and it will star Woody Harrelson and Laura Dern.

Below are some photos from last night's event as well as a link to my 2012 interview with Dan at Meltdown. (I'm wearing the same shirt! Hahaha.) 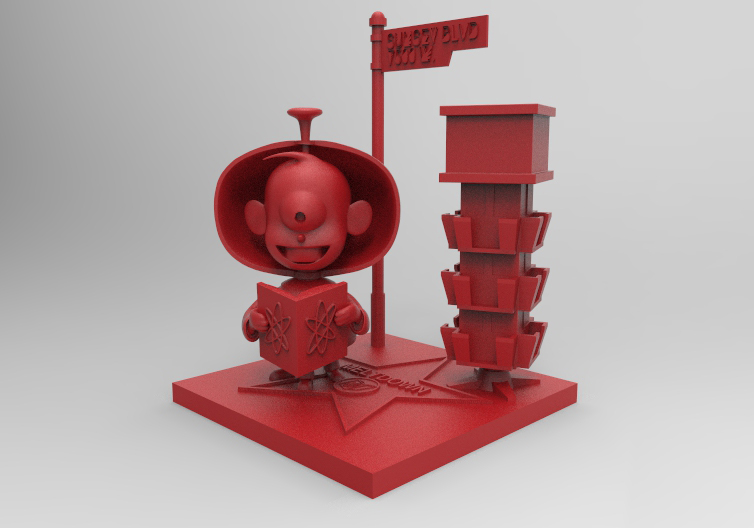 Professional toy designer Ryan Whearty has come up with several cool 3D designs featuring the Meltdown Comics mascot, which was designed by cartoonist Daniel Clowes. To celebrate the Daniel Clowes book launch event at Meltdown in Los Angeles on June 5th, the store is inviting owners of 3D printers to bring their machines to the store and participate in a group toy-printing session.

If you'd like to participate, send email to meltdown3d@gmail.com.

A better-than-perfect facsimile of an iconic comic book 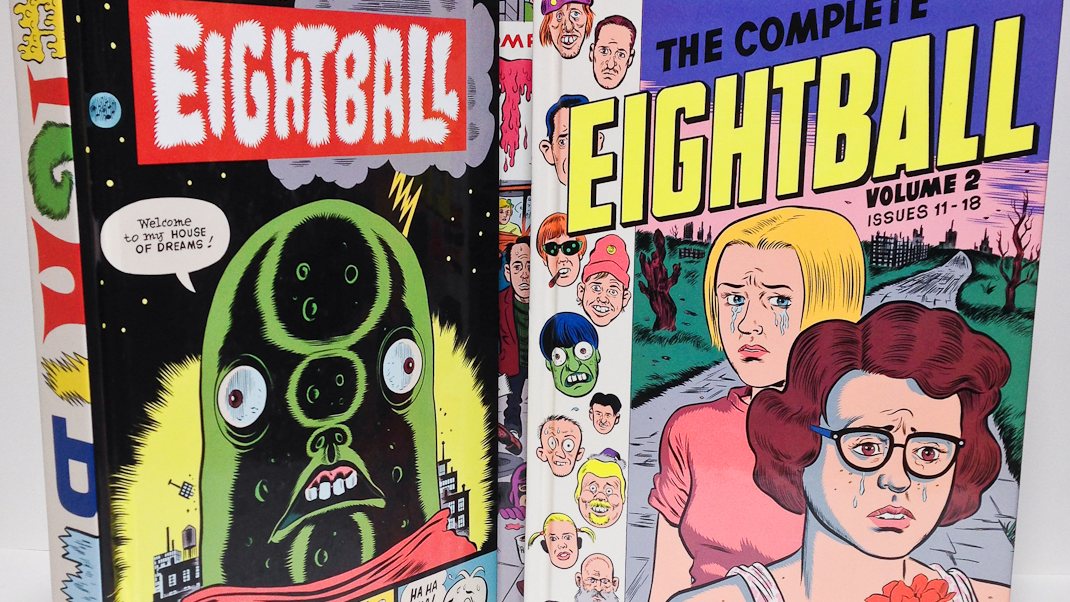 Can you recognize all the characters on the cover for Daniel Clowe's upcoming Complete Eightball 2-volume set?

This is a two-volume, slipcased facsimile edition of the Daniel Clowes comics anthology; it contains the original installments of Ghost World, the short that the film Art School Confidential was based on, and much more.

Before he rose to fame as a filmmaker and the author of the best-selling graphic novels Ghost World, David Boring, Ice Haven, and The Death Ray, Daniel Clowes made his name from 1989 to 1997 by producing 18 issues of the beloved comic book series Eightball, which is still widely considered to be one of the greatest and most influential comic book titles of all time. Now, for the 25th anniversary of Eightball, Fantagraphics is collecting these long out-of-print issues in a slipcased set of two hardcover volumes, reproducing each issue in facsimile form exactly as they were originally published. Included are over 450 pages of vintage Clowes, including such seminal serialized graphic novels/strips/rants as “Like a Velvet Glove Cast in Iron,” “Ghost World,” “Pussey,” “I Hate You Deeply,” “Sexual Frustration,” “Ugly Girls,” “Why I Hate Christians,” “Message to the People of the Future,” “Paranoid,” “My Suicide,” “Chicago,” “Art School Confidential,” “On Sports,” “Zubrick and Pogeybait,” “Hippypants and Peace-Bear,” “Grip Glutz,” “The Sensual Santa,” “Feldman,” and so many more. Full color illustrations throughout

Can you identify these Daniel Clowes characters?

Can you identify all of the silhouettes in these new drawings that Daniel Clowes drew for the Modern Cartoonist exhibition murals and "Chicago Views" prints? If you can, you will have a chance to win fabulous prizes! Visit Daniel's website for details. Read the rest

Daniel Clowes ranks among the top three of four greatest living cartoonists. I've been following his work since 1986, when I came across his Fantagraphics comic book Lloyd Llewellyn, about a retrofuturistic detective with a misanthropic streak.

Clowes is not only an amazing artist, he's also a fine observer of human behavior, which make reading interviews with him as much fun as reading his comic books. This month Fantagraphics published The Daniel Clowes Reader: A Critical Edition of Ghost World and Other Stories, with Essays, Interviews, and Annotations.

I'm relishing all 358 art-laden pages. They include the entire Ghost World story (made into a movie directed by Terry Zwigoff) with annotations, plus a number of rarely seen stories. Several of the twelve essays about Clowes' work were new to me, and I enjoyed re-reading Joshua Glenn's sharp interview from a 1990 Hermenaut interview. This is an essential book for all serious readers of Clowes' work.

The Daniel Clowes Reader: A Critical Edition of Ghost World and Other Stories, with Essays, Interviews, and Annotations Read the rest

Stunning cover from Daniel Clowes' Eightball no. 18 as a limited-edition print

I loved the cover painting for Daniel Clowes' Eightball no. 18, and now it's available as a limited-edition print.

This is a limited edition, archival, facsimile print of the cover painting used for issue no.18 of the comic Eightball by Daniel Clowes. It has been reproduced at a 1:1 scale to match the size of the original painting that is currently on display as a key part of the “Modern Cartoonist: The Art of Daniel Clowes” touring museum exhibition. This giclée print was created to the highest standards of production under supervision of the artist. The finest quality materials were used including an eleven-color, high dynamic range, process inkset on conservation grade 100% cotton acid and lignin-free paper and tested by the Fine Arts Trade Guild and guaranteed to resist fading and discoloration in excess of seventy five-years. Each print is signed and numbered by the artist and includes a registered certificate of authenticity. Don’t miss out on this chance to have a museum quality piece of art for your very own.

An optional logo was made for this print in the style of a “paste-up” that the artist would use in his formative years in a pre- digital era. Each logo is hand-cut by the artist and can be mounted (with archival PVA adhesive) by us at your request, or included ‘loose’ for you to choose to mount yourself (or not) when framing. The colorway for this logo differs from the one used on the printed cover of Eightball no.18.

[Video Link] Here's a fun short film about a couple who are very excited to meet Daniel Clowes at an event at Meltdown in Los Angeles last month.

Daniel Clowes spent a very special night at Meltdown Comics on April 5th, 2012. Carlos, a collector of Clowes' work, and his fiance Timony were living the experience as a dream come true. Follow them through this short documentary about the master cartoonist. Directed and Edited by: Rocío Mesa

Daniel Clowes' comic book, Eightball # 23 contained a 48 page story called "The Death–Ray." It's a superhero origin story about a teenage boy named Andy who discovers he has superpowers whenever he takes a puff of a cigarette.

I won't spoil the story by telling you how Andy acquired this ability, but he also discovers a costume along with a comical-looking ray gun that can instantly and silently remove any life-form from the face of the Earth without a trace. Andy and his loyal sidekick Louie -- often the targets of bullies at school -- use and abuse Andy's omnipotence as a tool of revenge and vigilante vengeance, with mixed results.

This new hardcover edition (published by Drawn and Quarterly) is presented in a much larger format than it appeared in Eightball #23. As usual, the art and design is exemplary -- Clowes tells this story of triumph and betrayal in the form of one- and two-page chapters that jump between first person narrative, fly-on-the-the-wall reporting, and after-the-fact documentary style interviews. This masterpiece makes it clear (at least to me) that Daniel Clowes is one of the greatest living cartoonists.

I wish Clowes would write a novel. Not because I don't like his art (I love it), but because his graphic novels can be read in less than an hour, and I would like to become immersed in one of his stories for a much longer time.

The Death-Ray, by Daniel Clowes Read the rest