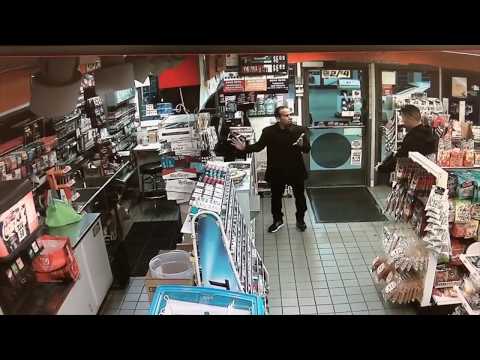 An off-duty Buena Park, California Police officer decided that a $1 pack of candy was worth risking human life. Mistakenly believing Jose Arreola was shoplifting a package of Mentos he had just purchased, the cop went into thug mode. After repeatedly being told Arreola had paid for the candies, by both the victim and the store's cashier, the officer offers an apology.

What are the guidelines for when an officer is supposed to draw a firearm? Was anyone in any danger here? Did he need a gun to stop a suspected candy thief? I would hope officer education programs explain that considering consequences like "One of us dies, or that candy gets stole" might be part of the rubric?

Buena Park PD Chief of Police Corey S. Sianez offered this statement via Facebook: "I want you to know that after I watched the video I found it to be disturbing, as I’m sure it was to you. However, because there is an ongoing personnel investigation and potential litigation pending against the city, I am unable to discuss the details of our investigation."

Video via the Orange County Register Read the rest