Flat earth-preaching rocketeer finally gets off the ground 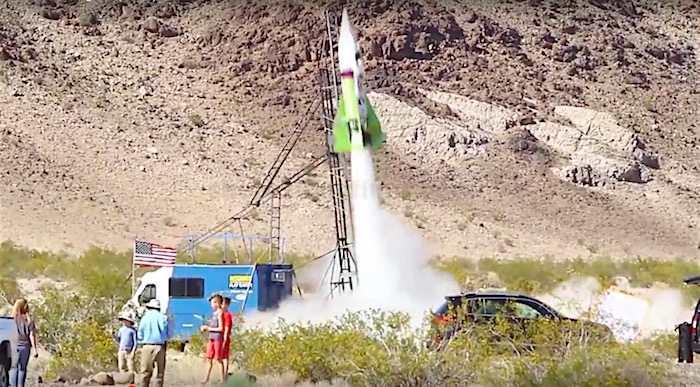 You likely read about "Mad" Mike Hughes in the news last year – you know, when you weren't busy stockpiling canned goods and potassium Iodide tablets to help deal with the existential dread that's currently gripping the planet. Hughes is the flat-earth loving, paradoxical science-hating DIY rocket designer who stated that he'd blast himself into the sky in a steam-powered, homemade rocket to prove that the earth isn't round.

That was a mouthful, but there's a lot going on here.

The first time that Hughes attempted to fire himself into the air in a blaze of Darwinism, the Department of Land Management shut him down, as his flight path would have taken him into the airspace over public lands. So, Hughes scrubbed the launch. Yesterday, he took another go.

According to the Associated Press, Hughes's steam-powered death chair was able to carry him to a distance of 1,875 feet into the air before he and his capsule floated back to earth, in relative safety, via parachute. When questioned about how he was feeling after surviving his flight, Hughes seemed happy that it was over and done with, citing that his back hurt, but over all he felt relieved that it was over.

No matter what you believe about Hughes' beliefs about the shape of the earth, of the lunacy it takes to strap yourself to the tip of a homemade rocket, you've got to respect that he pulled it off. Maybe he didn't gain as much altitude as he'd wanted. Read the rest