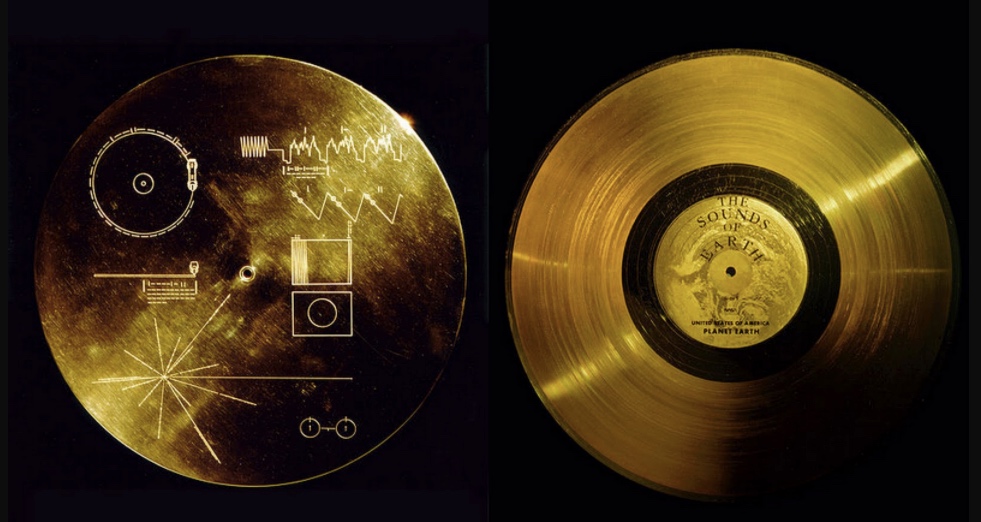 This Saturday (3/10) from 5pm-7pm, my friends at San Francisco's Tunnel Records + Beach Goods are kindly hosting a Voyager Golden Record Party with complimentary beverages! I'll be there to talk about the iconic message for extraterrestrials launched into space on a phonograph record 40 years ago. My friends Tim Daly and Lawrence Azerrad and I co-produced the first ever vinyl release of the Voyager Record this year and we were honored with a 2018 Grammy award for Best Boxed or Special Limited Edition Package.

Tunnel Records will have the Voyager Golden Record 3xLP Box Sets and 2xCD-Book edition available for sale. Can't make it? You can also order directly from our label Ozma Records. Read the rest

Ursula K. Le Guin on vinyl! "Music and Poetry of the Kesh" 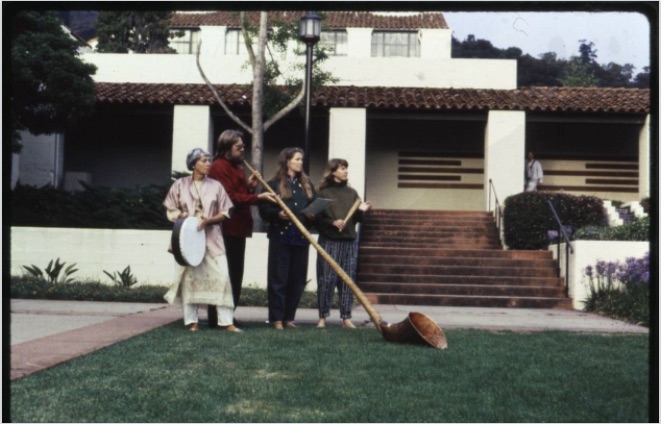 Ursula K. Le Guin's "Always Coming Home" (1985) is a combination novel and anthropological study of the Kesh, a culture that "might be going to have lived a long, long time from now in Northern California." Early editions of the book included a cassette of faux "field recordings," indigenous songs, and other audio of the Kesh. Now, the good people at Freedom to Spend are bringing the Kesh experience to vinyl in a lovely limited edition that includes an LP containing the audio of the original cassette, "a deluxe spot printed jacket with illustrations from Always Coming Home, a facsimile of the original lyric sheet, liner notes by Moe Bowstern, multi-format digital download code and a limited edition bookmark letterpressed by Stumptown Printers in Portland, OR." From Freedom to Spend:

For Music and Poetry of the Kesh, the words and lyrics are attributed to Le Guin as composed by Barton, an Oregon-based musician, composer and Buchla synthesist (the two worked together previously on public radio projects). But the cassette notes credit the sounds and voices to the world of the Kesh, making origins ambiguous. For instance, “The River Song” description reads, “The prominent rhythm instrument is the doubure binga, a set of nine brass bowls struck with cloth-covered wooden mallets, here played by Ready...”

The songs of Kesh are joyful, soothing and meditative, while the instrumental works drift far past the imaginary lands. “Heron Dance” is an uplifting first track, featuring a Wéosai Medoud Teyahi (made from a deer or lamb thigh bone with a cattail reed) and the great Houmbúta (used for theatre and ceremony). 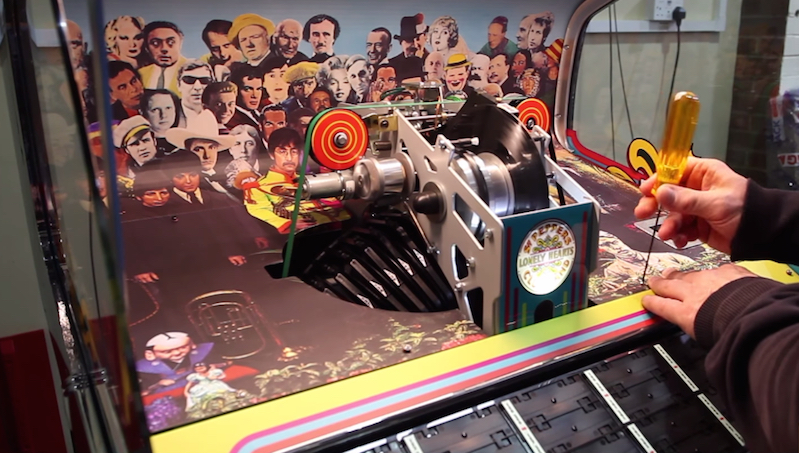 Along with directing such classic films as Escape from New York, Halloween, The Fog, and The Thing, John Carpenter also composed the soundtracks. For those who want a survey of Carpenter's synth stylings, I recommend the new compilation from Sacred Bones Records, titled "John Carpenter Anthology: Movie Themes 1974-1998." The celebrate the release, Carpenter created this music video for the theme from Christine (1983), in which a woman summons an Uber and the demonic driverless 1958 Plymouth Fury shows up. Just kidding about the Uber part. 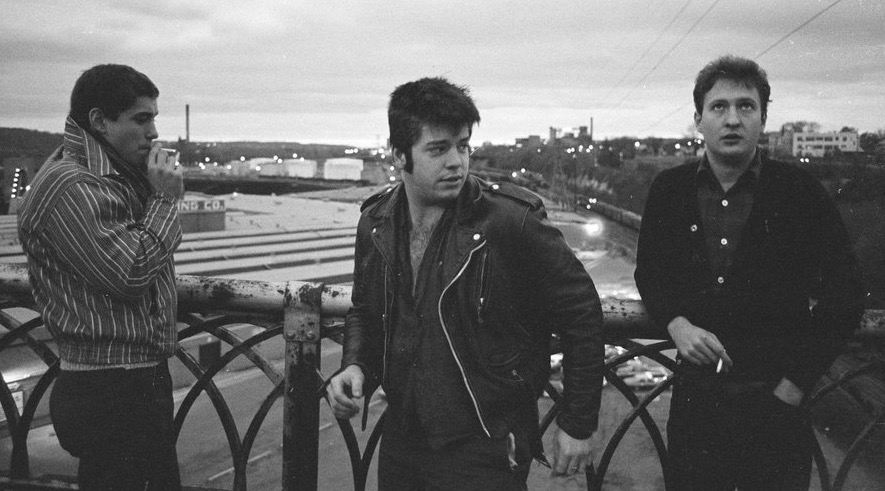 In 1979, Hüsker Dü played their first show, paving the way for Nirvana, The Pixies, Foo Fighters, and really the entire realm of alternative rock. I have a special love for the band as they were my first club show, back in 1985 or so. (My first concert was Styx and, yes, that was amazing too.) Over the years I've become friends with Bob Mould who is a very warm, funny, earnest, and mellow gentleman. Of course Bob didn't sound mellow back when he, Grant Hart, and Greg Norton were making the ferocious music heard on this new 4xLP box set (and CD set) of Hüsker Dü's early material.

From the Numero Group label, Savage Young Dü contains 69 tracks, 47 of which have never been issued, and 108-page hardbound book of photos, flyers, session details, and deep liner notes. Yes, Bob, Grant, and Greg were all on board with this release. No, they absolutely will not reunite for any live shows.

And in case you missed it, here's a classic Boing Boing Video/Remedy Editorial performance and interview from 2014: "Bob Mould: An Old Punk Kicks New Ass"

Last night, NBC Nightly News aired the wonderful video below about the Voyager Golden Record vinyl box set I produced with my friends Tim Daly and Lawrence Azerrad! Forty years ago this month, NASA launched two spacecraft, Voyager 1 and 2, on a grand tour of the solar system and beyond, into the mysteries of interstellar space. Mounted to each spacecraft is a golden phonograph record, a message to introduce our civilization to extraterrestrials, perhaps billions of years from now. The Voyager Golden Record tells a story of our planet expressed in sounds, images, and science. As Lawrence said in the video, "it's a lovely reminder of what it means to be a human." Thank you to NBC Nightly News!

"A lovely reminder of what it means to be a human." Our @nbcnightlynews report on the Voyager Golden Record. https://t.co/UHczqFQ4mS

Adam Savage learns how records are made with Jack White

So whenever I read a "vinyl returns" article I dream of a new HD physical media format that's backward compatible with it. An LP-sized optical disk with the grooves on a clear laminate layer, perhaps. Or maybe a vinyl with a hidden flash storage layer within and exposed metal rings to read it with near the spindle. Or some kind of bad-ass sharpened metal disk played the old-fashioned way but at nyquist-busting RPM. Read the rest 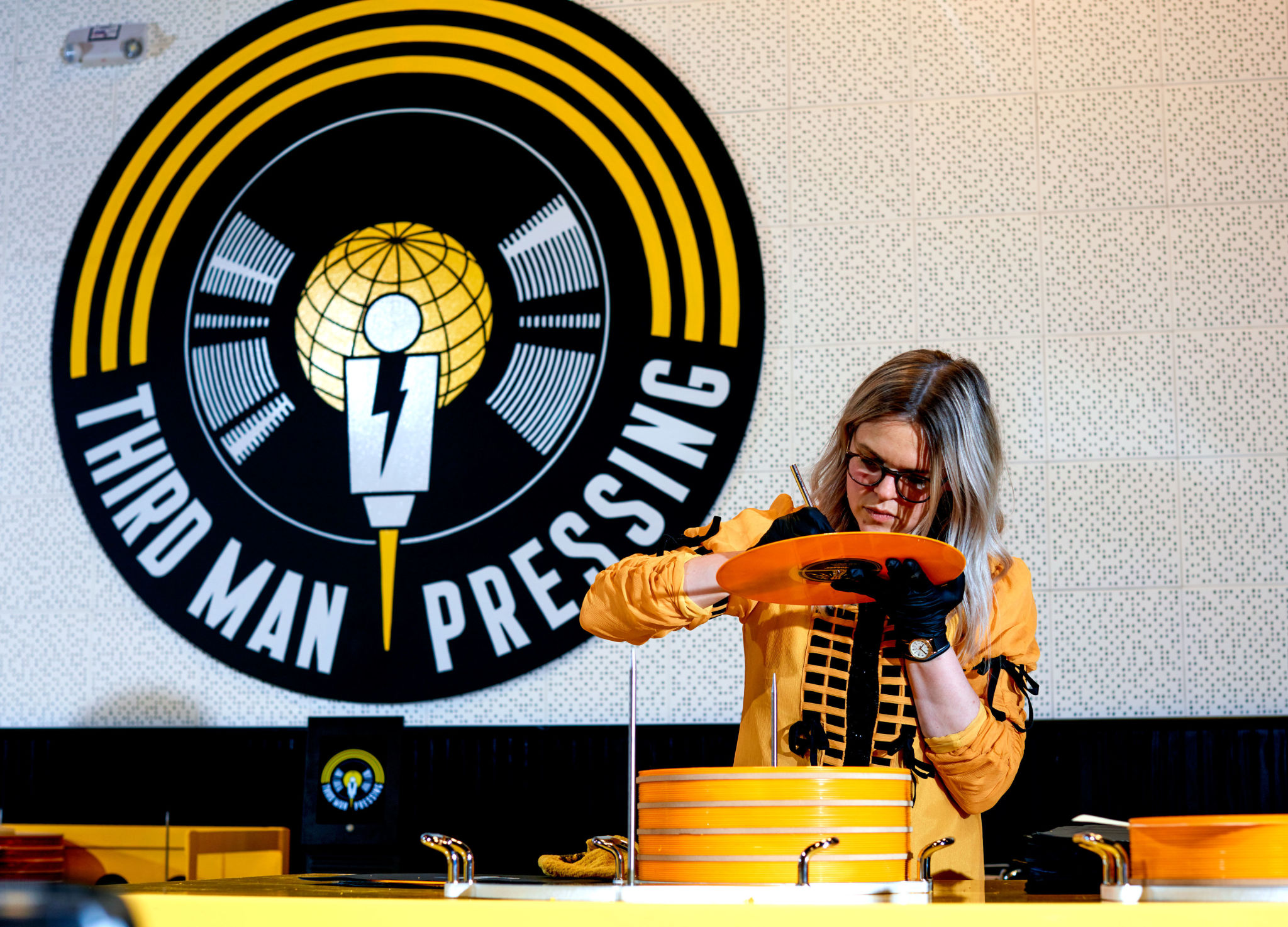 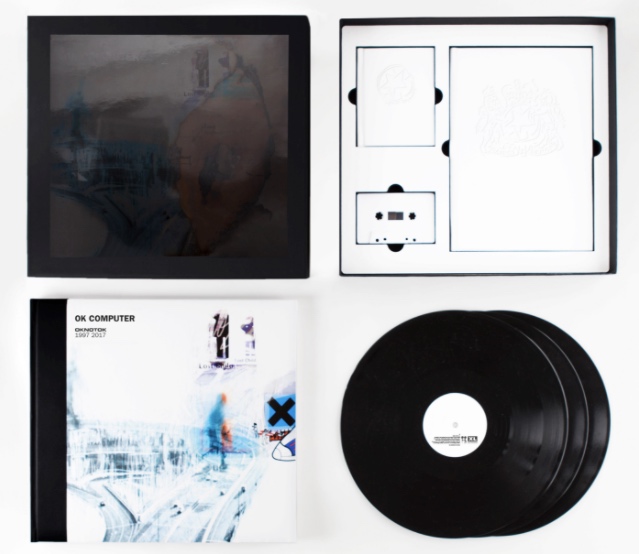 Under this weighty tome are yet more surprises: a notebook containing 104 pages from Thom Yorke's library of scrawled notes of the time, a sketchbook containing 48 pages of Donwood and Tchock's 'preparatory work' and a C90 cassette mix tape compiled by us, taken from OK COMPUTER session archives and demo tapes.

David Bowie and Trevor Jones's soundtrack to Jim Henson's fantastical film Labyrinth, starring Bowie as Jareth the Goblin King, will be reissued on vinyl next month for the first time since its release in 1986. (These days an original pressing goes for around $75-$100.) To complement Trevor Jones's synthesizer/orchestra score, Bowie wrote five original songs for Labyrinth, including Underground, As The World Falls Down, and the classic Magic Dance.

With Magic Dance, "the song for Jareth and the baby, sung by them and the goblins in the castle throne room - I had problems,” Bowie said at the time. “The baby I used in the recording studios couldn’t, or wouldn’t, put more than two gurgles together, so I ended up doing the baby-gurgle chorus myself! It’s an up-tempo song, and visually exciting.”

That's not dust on the stylus, that's Uncle Fred! 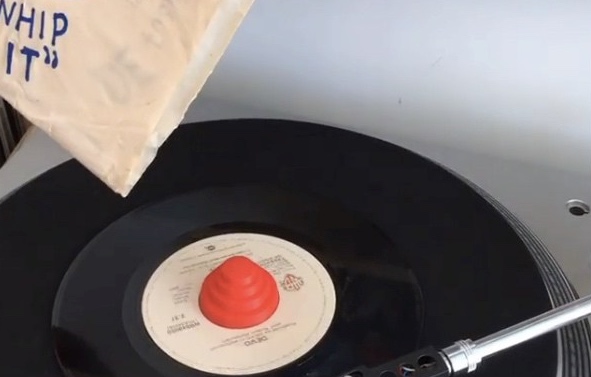 The good people at Oakland's excellent Contact Records record shop are selling these delightful Devo "Energy Dome" adapters to play your New Wave 45s in style. Locally 3D-printed by Jeremy Solterbeck, they're just a few bucks each and big fun for vinyl geeks. 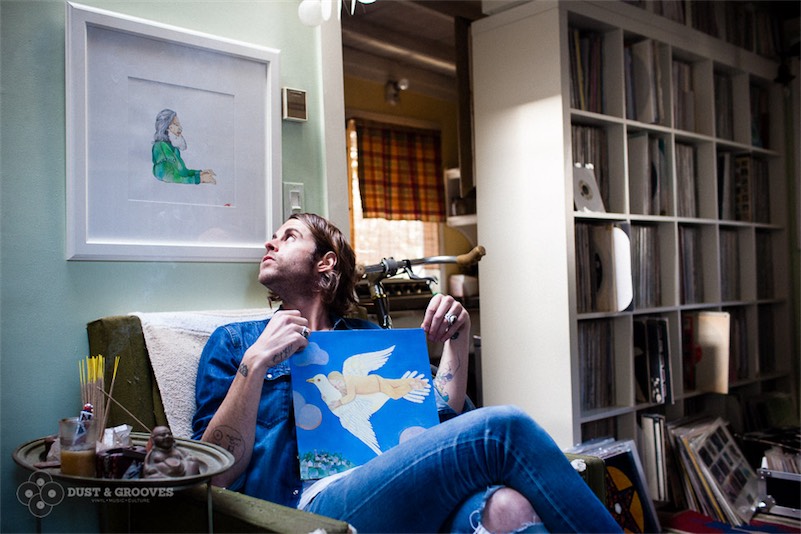 Zach Cowie is a cratedigger of the highest order. Following gigs at Rhino and Sub Pop, Zach turned his insatiable record collecting into a job: He's a music supervisor for TV and movies with credits like Master of None and The Little Hours and curated musical selections for the fashion label Rodarte. As a DJ, Zach (aka Turquoise Wisdom) frequently makes the scene in LA and elsewhere, sometimes spinning with pals like Elijah Wood and Andy Cabic (Vetiver). It seems that his destined role in life is to turn us on to the best music we've never heard of. And he's got a Voyager Golden Record tattoo, so that makes me like him even more. Here's an interview with him from Dust & Grooves.

Zach is now recording a monthly set for NTS called "Play It As It Lathes" that mixes ambient, psych, spiritual jazz, prog, cosmic country, dream pop, folk, and every other far-out genre you can imagine into stunning two-hour sets.

"It's the best place to hear what i’ve been listening to at home lately," Zach says.

Turn on and tune in below.

Image at top by Eilon Paz/Dust & Grooves Read the rest 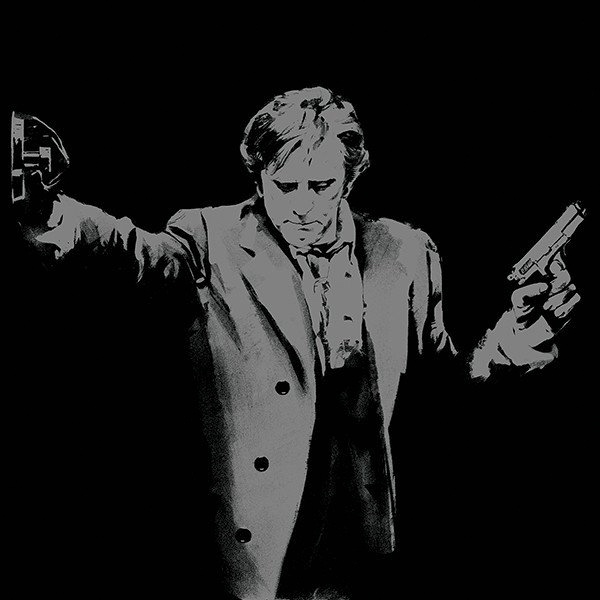 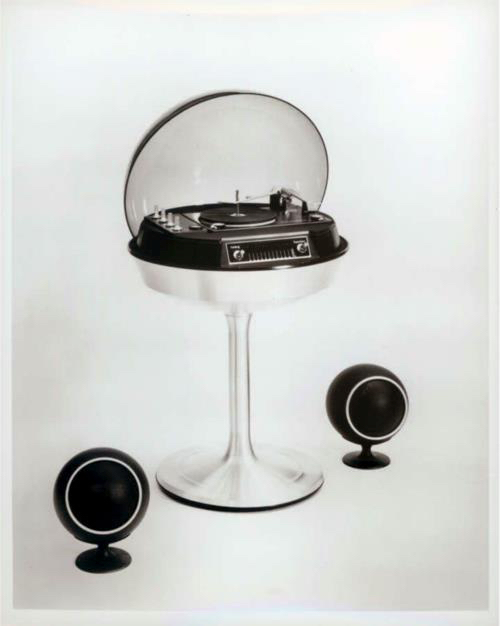 Over at the Vinyl Factory, Anton Spice shares a wonderful collection of 1960s and 1970s stereo systems designed for Space Age bachelor pads. Above, the classic Electrohome Apollo 711 (1970); below are a few more of my favorites. See more at: "The 15 most incredible Space Age record players" (VF) 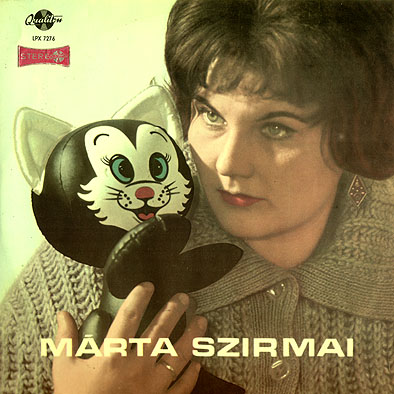 Vinyl Divas is a comprehensive collection of vintage classical music divas, and it ranges from the sublime to the ridiculous to the sublimely ridiculous. Includes lists by artist name, collection based on themes, and even vanity albums by self-published divas. The fashion, the makeup, the styles, the taste both good and bad... prepare to go down a rabbit hole of 20th century nostalgia. Read the rest