Pasta made from insects selling well in France! 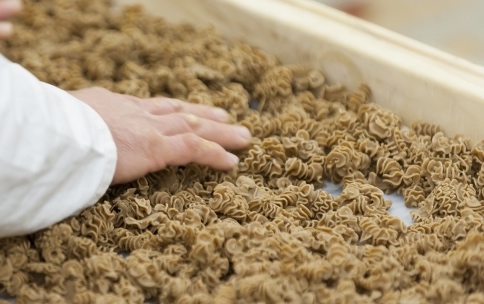 Atelier a Pates, a small artisanal pasta shop in Thiefosse, France, has a booming business in radiatori, fusilli, spaghetti and penne made from seven percent pulverized crickets and grasshoppers. From CTV News:

Four years on with the addition of insect flour to the mix, "it's working so well that we will soon be able to hire a second person," (proprietor Stephanie) Richard says, proud of her weekly production now at some 400 kilos (880 pounds).

And she does not plan to stop there: she is working on a new recipe using Maroilles cheese from northern France, and plans to start making stuffed pastas.

At a little over six euros ($6.60) for a 250 gramme (about half a pound) package, insect flour pastas are more expensive than standard kinds, but Richard notes that they can replace meat for vegetarians -- or for people who prefer crickets.

"People with iron or magnesium deficiencies will also eat these products," she says.