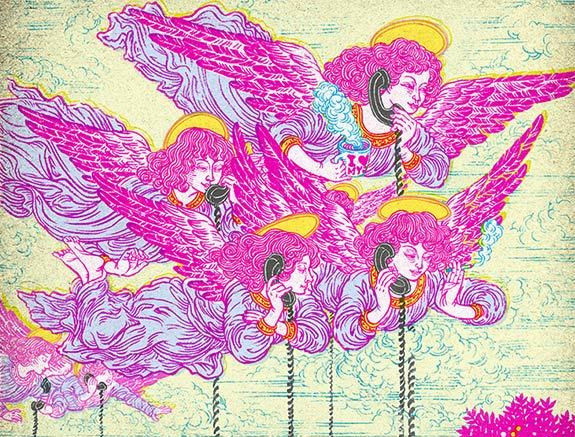 Laurie Penny's latest, sacrelicious short story on Tor.com, "Your Orisons May Be Recorded," is a hilarious thought experiment about the working conditions for the angels who answer customer service prayers from dissatisfied humans.

As you'd expect from Penny, there's a sting in the tail -- ha ha, only serious. When I read this while teaching her at Clarion West last year, I was delighted, and I expect you will be too.

What I really dread are the quiet ones. The ones who say very little. Sometimes they cry very, very softly, hoping you won’t hear them, which just makes it worse.

They all get through to us eventually. That’s why it’s important to know where they’re calling from. A Catholic with an urgent question about the propriety of cleaning consecrated wine off a good white carpet will get rankled if you quote the Koran by accident, and there you are and you’ve just lost a repeat client.

So I talk to the flood victims in my gentlest voice for an average of ten minutes and twenty-three seconds each.

Then I have a nice chat with a nun in Bolivia who really just wants Jesus to tell her where she’s left her glasses this time.

I tell her they’re by the sink. Miniature miracles are allowed for those who’ve signed the lifetime plan. Nobody believes them anyway.

Your Orisons May Be Recorded