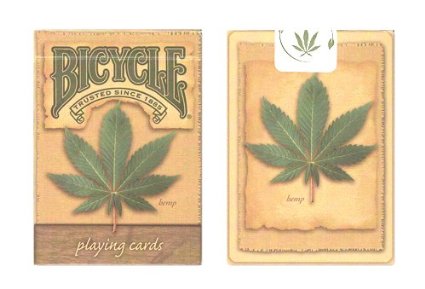 Neither of these decks are smokable, but they bring two of my favorite things together: weed and magic! For sleigh of hand, and other tricks, I always prefer the Bicycle brand cards, but the rolling paper inspired cards are fun as well.

Bicycle's Hemp Deck has a hemp leaf on the back, but the cards are made of your typical US Playing Cards stock and finish.

RAW rolling papers aren't as iconic as Zig-Zag, but if you want to tell a joint rolling story to accompany a magic trick, this deck'll help convince people they are looking at something special. They also come with a bracelet.