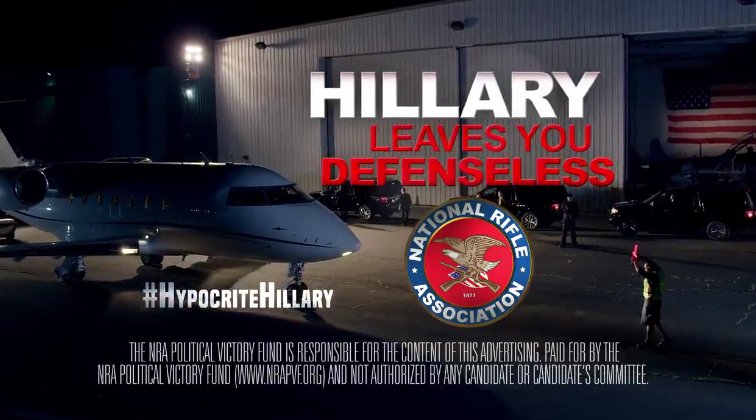 The Citizens United ruling says that organizations like the NRA can spend as much as they want to support political candidates, provided that they don't coordinate with the campaign, which means that it's just a happy coincidence that the day after Donald Trump called on gun enthusiasts to assassinate Hillary Clinton and federal judges, the NRA announced that it would spend $3M on the most-expensive-to-date pro-Trump ad, which would focus on Hillary Clinton's alleged plan to "leave you defenseless" by taking away your guns.

Politifact confirms that Clinton is not particularly pro-gun-control.

"Tours the world on private jets. Protected by armed guards for 30 years. But she doesn't believe in your right to keep a gun at home for self defense," the narrator said in the ad.


The ad then shows the back of the woman watching a clip from Clinton on the plane where she says, "I fully appreciate how hard life is for so many Americans today."
The video ends with the narrator saying: "An out of touch hypocrite. She'd leave you defenseless."

Clinton's campaign responded to the ad with a statement, telling CNN: "The gun lobby is coming to Donald Trump's defense and spending millions of dollars to spread lies about Hillary Clinton because they know Trump will always do their bidding."