To see what Trump will do to America, look to his disastrous walled Scottish golf course 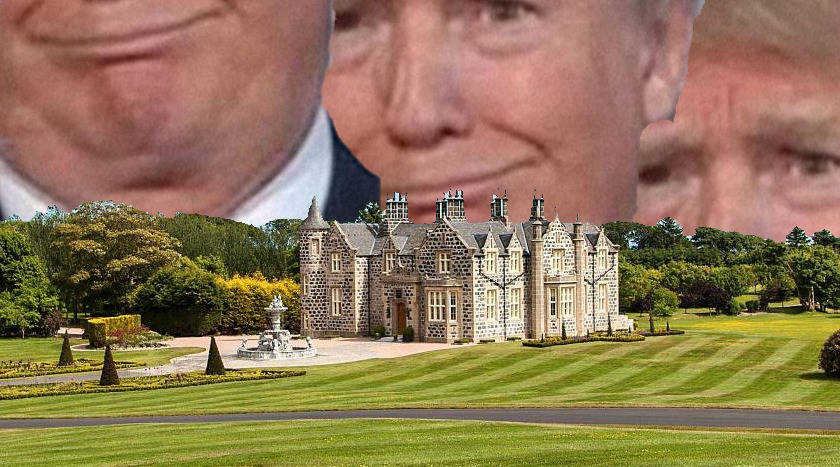 Trump International Golf Links was built on the site of a protected 4,000-year-old sand dune; he bullied anyone who wouldn't sell their homes to him to build it and then sent the holdouts a bill for the 15-foot-high wall he built around their homes to block their view of the ocean; he promised a $1.25B investment and ended up investing no more than $50m; he promised 6,000 jobs and created 95; he promised two golf courses and only opened one; he promised to build a 450-room luxury hotel and 950 apartments and built neither -- and now he does everything he can to prevent the creation of clean-energy wind-turbines off the coast.

Trump publicly ordered Nigel Farage, whose UK Independence Party has not won a single Scottish election, to bully the Scottish government into giving him more favourable treatment, a move greeted with hearty laughter by the ruling Scottish National Party, who cordially and publicly hate Trump (though their former leader, Alex Salmond, once gave Trump help, which he now publicly repudiates).

Worse still, Trump's odious remarks and obnoxious personality have prompted the Scottish golfing establishment to boycott his other course, costing the town hundreds of millions of pounds.

The wind turbines, whose foundations are expected to be laid next year, still seem to rankle Mr. Trump. In a meeting right after his election victory, Mr. Trump urged Nigel Farage, the leader of the populist U.K. Independence Party — which has failed to win a single seat in Scotland — to fight offshore wind farms in Scotland on his behalf.

“To actually believe that having a conversation with Nigel Farage and his henchmen about wind energy is going to change Scottish government policy is on the outer limits of possibility,” Mr. Salmond said.

As a presidential candidate who was caught on a hot microphone bragging about sexually assaulting women, Mr. Trump found little sympathy among Scotland’s political leaders, most of whom happen to be women.

Nicola Sturgeon, Mr. Salmond’s successor, has called Mr. Trump’s comments “deeply abhorrent” and stripped Mr. Trump of his membership in the Global Scot business network. Kezia Dugdale, who runs the Scottish Labour Party, commented after Mr. Trump’s election that a “misogynist” would move into the White House, while Ruth Davidson, the leader of the Scottish Conservatives, described him as a “clay-brained guts, a knotty-pated fool.”

In Scotland, Trump Built a Wall. Then He Sent Residents the Bill. [Katrin Bennhold/NYT]